With all the talk about TVB Anniversary Awards, it also means another thing is coming up. If you guessed the annual TVB Sales Presentation, you're correct!

Each year, TVB hosts a show for advertising clients. It is a chance to showcase all the exciting new programmes that is in store for the upcoming year (so, you know, advertisers can pour more money in TVB's bank account). This year's event will be held on November 8 (which no one needs to care about except for the lucky people attending). The important date to be circled on fans' calenders is November 24, when the programme will be aired.

Currently, all the siu-sang and fadans are busy sucking up to senior executives for awards filming for sales presentation clips. Here's a glimspe of what is in store for 2013:

Myolie and Wayne are spies. Edwin is the villian. The story takes place in 1920-30s China. The Hippocratic Crush 2 - The original cast will remain intact with Lawrence Ng joining them. Here's hoping everyone remembers how to be a doctor and not just be involved in an endless love triangle (ahem, Ghetto Justice 2).

Three Lifetimes of Fate - Bobby Au-yeung and Esther Kwan continues their fate - for three lifetimes and a thousand years this time. Let's call it Maiden's Vow 2.

Eat For Slave - Raymond Lam and Ron Ng reunite for fans of the RR bromance. The female cast will consist of Fala Chen, Sharon Chan and Nancy Wu.

The story takes place in the Qing Dynasty. Raymond will be an Emperor. Fala and Nancy are fighters. Sharon Chan might be a concubine the looks of her costume. I'm guessing Ron Ng will be the fatty that will make the series live up to its name?

Sniper Attack 2013 - Laughing Gor returns? Not quite. But Michael Tse will be a cop once again, this time paired with (soon-to-be TV Queen?) Kate Tsui. No undercover work this time (probably). They will be members of the SDU aka Flying Tigers. Well, TVB did promise a Tiger Cubs 2, didn't they?

Office of Spreading Love - The historic collaboration between the TV Kings Wayne Lai and Moses Chan! Not really. People seem to forget that they were both in The Gentle Crackdown (even Moses himself, who said "I've always wanted to work with Wayne. I finally get my wish.")

It is the first time for both Wayne and Moses to portray lawyers. They will battle things out in court over inheritance cases. Fala Chen, Evergreen Mak and Samantha Ko are also part of the cast. 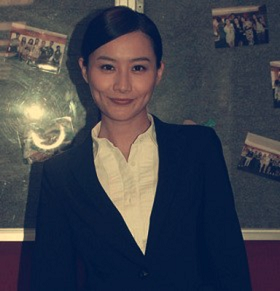 Big Wheel - Ruco Chan and Edwin Siu are long-lost brothers living in Hong Kong and Macau, respectively. What happens when they meet again? In TVB world, there's only one answer: fight over Linda Chung. The story spans 30 years from 1980s to the present.

Unrequited Love in Twin Cities - Aimee Chan, Lin Xia Wei (Raymond Lam's cousin) and Tony Hung in a modern drama. The crew travelled to Malaysia for filming, making this the first sales presentation clip that is filmed outside of Hong Kong.

Posted by miriamfanz at Thursday, October 11, 2012