2018 was a big year for me personally. I graduated from law school, passed the bar exam and moved to New York City to start a new job. I also did a lot of travelling, which I hope to write about at some point. But for now, here is a look-back at the TV and movies that I watched!

The list of TVB series that I have watched this year is a short one:

In the absence of good TVB dramas, I have turned to American TV. The first show I watched was Timeless. It is a history lover's dream show. It is well-researched and seamlessly incorporates historical details into the story. And it covered all sorts of historical events and characters. I loved tuning it each week to find out which historical time period the Time Time would travel to next. The second show I watched was Billions, a fast-paced, clever battle of the wits with unpredictable turns. The best thing about it is watching how far the characters are willing to go to win this fight.

I got to see a lot of movies this year because of Moviepass. Sadly, good things don't last forever.

Now that I don't have to read for school anymore, I am rediscovering the joys of reading for leisure. The first book that I finished in a long time is The Heart's Invisible Furies by John Boyne. It was an unexpected emotional experience as I followed the life of an adopted Irish boy who struggles to understand his identity. The book was captivating, eye-opening, at times shocking, and deeply emotional. Highly recommend!

Posted by miriamfanz at Monday, December 31, 2018 No comments:

The number of series outstanding for each artist
As of December 27, 2018


Posted by miriamfanz at Thursday, December 27, 2018 No comments: 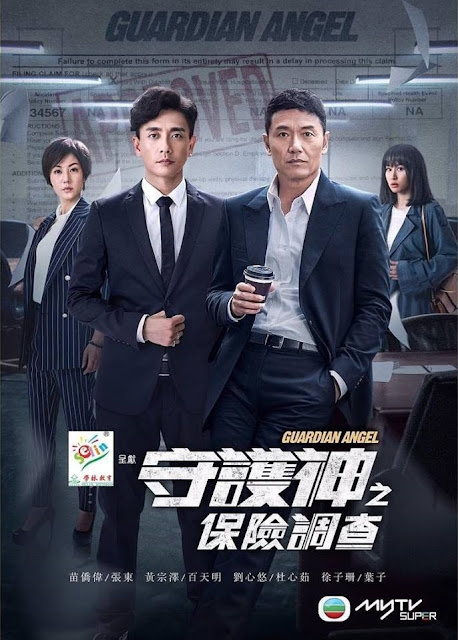 Northern Lights Insurance Company has a team of insurance investigators that is led by Benz Hui, who loves to make impromptu jokes, and includes wealthy heiress Annie Liu, the affectionate Bosco Wong and retired police officer Michael Miu. They each have their own talents and form a legendary team in the insurance industry. They manage to thoroughly investigate and uncover the truth in all the thorny, dangerous or strange cases that are passed to them. Although 9 out of 10 cases end up with the insurance company paying out money, their mission is to discover the truth. Fairness, impartiality and righteousness are their guiding principles. The three investigators are like special agents, conducting cross-border investigations, searching for clues, following targets and gathering evidence. At the same time, they unintentionally become involved many people's stories and become their guardian angel.


Guardian Angel is a collaboration between Shaw Brothers and iQiyi. It was released online earlier and will air on TVB beginning December 24.

Posted by miriamfanz at Sunday, December 23, 2018 No comments:

Overview - The Learning Curve of a Warlord

Dicky Cheung is an unambitious, low-ranking corporal in the Warlord Era. Relying on his savvy mind and silver tongue, he made it through the last twenty years. One time, he saves Generalissimo Choi Kwok Hing and is promoted seven ranks, becoming the local tyrant of a town. Three warlords (Max Cheung, Eddie Pang and Koo Ming Wah) who had established their territory near the town are seething in anger and waiting for an opportunity to deal with him. Luckily, Dicky has three sworn brothers (Tony Hung, Tsui Wing and Oscar Li) who are united against the enemy. They even manage to coerce weapons expert Raymond Cho to join them, allowing them to establish their footing in the town. Dicky has three wives (Zoie Tam, Vivien Yeo and Sisley Choi) who are always competing for his favour. Sisley is a member of the Revolutionary Party. Although Dicky knows of her identity, he still keeps her by his side, which could stir up trouble at any time. The throbbing ambition of someone within the barracks, along with having the other warlords and the Japanese watching him like a hawk, puts Dicky in a desperate situation.

Posted by miriamfanz at Sunday, December 02, 2018 No comments:

The Learning Curve of a Warlord Theme Song

Dicky Cheung sings the theme song, "Utterly Fearless" (大無畏), for The Learning Curve of a Warlord.

The sub-theme song, "Honeymoon" (蜜運), is also performed by Dicky.

Posted by miriamfanz at Sunday, December 02, 2018 No comments: