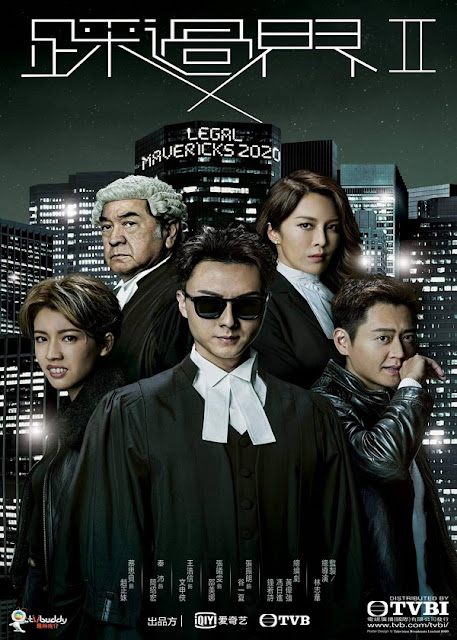 Nicknamed "Blind Hero", blind barrister Vincent Wong's four other senses are super strong. He teams up with paralegal Sisley Choi and private detective Owen Cheung to help vulnerable populations fight for justice, even if it means using borderline tactics. Barrister Kelly Cheung tries to get close to Vincent. The two end up facing each other in court. Kelly has the support of her mentor, Paul Chun. Paul had also been Vincent's mentor when he was a trainee, but their mentor-mentee relationship broke down because of a homicide case with a missing dead body. Vincent presents new evidence for the defendant's appeal and crosses swords with Paul again, igniting a series of battles! Kelly's appearance leads to subtle changes in the relationship between the "iron triangle" of Vincent, Sisley and Owen.
Posted by miriamfanz at Sunday, November 15, 2020 No comments: 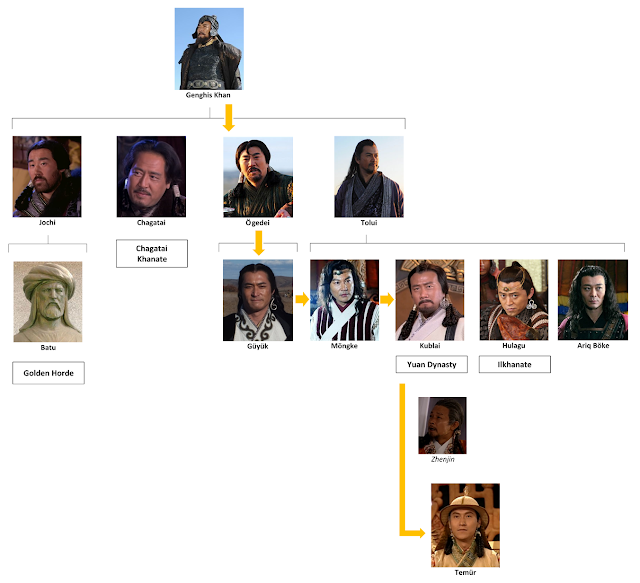 Genghis Khan (成吉思汗) established the Mongol Empire after uniting the tribes on the Mongol steepe. He was named the first Great Khan. He went on to conquer vast amounts of territory in Asia and Europe.

Genghis Khan had four sons with his wife, Börte (孛兒帖).

His eldest son was Jochi (朮赤). There were questions about Jochi’s true paternity because Börte had been held captive for eight months by a rival tribe sometime before his birth. Although Genghis Khan claimed Jochi as his son, he avoided naming him as his successor to avoid conflict with his other sons. When Jochi died, his son, Batu (拔都), inherited his territorial grants in the western part of the empire (modern-day southern Russia and Kazakhstan) and established the Golden Horde.

Genghis Khan’s second son was Chagatai (察合台). Chagatai was considered to be hot-tempered and vowed to oppose Jochi if Jochi was named as Genghis Khan’s successor. Chagatai ruled over the Chagatai Khanate, which covered territory in central Asia (modern-day Uzbekistan, Kyrgyzstan and Tajikistan).

Genghis Khan named his third son, Ögedei (窩闊台), as his successor. Under Ögedei, the Mongol Empire continued to expand across Asia and into central Europe. Ögedei personally led the Mongol conquest of the Jin Dynasty (which had ousted the Song Dynasty in northern China). This set the stage for the Mongols’ eventual conquest of China and establishment of the Yuan Dynasty. Ögedei reigned for twelve years. He was succeeded by his son, Güyük (貴由), after a five-year interregnum in which Ögedei’s widow, Töregene (脫列哥那), yielded power as regent. Güyük lasted less than two years as Great Khan and died while marching to challenge his cousin, Batu.

Genghis Khan’s youngest son was Tolui (拖雷). As the youngest son, he inherited the Mongol homeland in accordance to the Mongol tradition. After Genghis Khan’s death, Tolui served as regent of the empire for two years until his brother, Ögedei, could be formally elected as Great Khan. He then joined Ögedei in the campaign against the Jin Dynasty.  He died after successfully defeating the Jin. Although Tolui never ascended to the position of Great Khan, his descendants (the Toluids) would become dominant figures in the empire.

After the death of Güyük, Tolui’s eldest son, Möngke (蒙哥) was elected as Great Khan with the support of Batu. He faced opposition from members of the Ögedei and Chagatai families, but he quickly defeated them. During Möngke’s eight-year reign, he focused on conquering territory in southern Asia and the Middle East. He assigned his younger brother, Hulagu (旭烈兀), the task of conquering the Middle East. Hulagu was proclaimed the ruler of the Ilkhanate (which covered modern-day Iran, Turkey and Afghanistan) after his successful campaigns.

The death on Möngke sparked civil war among the Toluids and across the empire. His younger brothers, Kublai (忽必烈) and Ariq Böke (阿里不哥) convened competing councils to elect them as Great Khan. Kublai finally defeated Ariq Böke after a four-year civil war. Kublai would go on to conquer the Song Dynasty and establish the Yuan Dynasty in China. He ruled as Emperor of China for 34 years. His original heir, Zhenjin (真金) had died, so he was succeeded by his grandson, Temür (鐵穆耳).

Posted by miriamfanz at Tuesday, November 10, 2020 No comments: