The Police Career of Ben Wong

As a teenager, Ben studies at the Royal Police Cadet School. He then graduates from the Police Training School and spends his first three years of service on the Patrol Sub Unit and Police Tactical Unit.

With a promotion to Sergeant, he joins the Criminal Investigation Department (The Threshold of a Persona).

Following the arrest of his previous superior, Ben continues to work as a CID detective under a new boss (movie Life Without Principles). 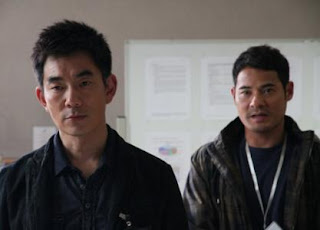 Next, he takes on an undercover assignment from the Criminal Intelligence Bureau (Lives of Omission).

Upon completing his mission, he is transferred to the Commercial Crime Bureau (The Ultimate Addiction).

Ben is promoted to Senior Inspector and rejoins the PTU in a leadership capacity (movie Tactical Unit - Comrade in Arms).

A promotion to Chief Inspector comes next, along with a move to the Narcotics Bureau (Highs and Lows) 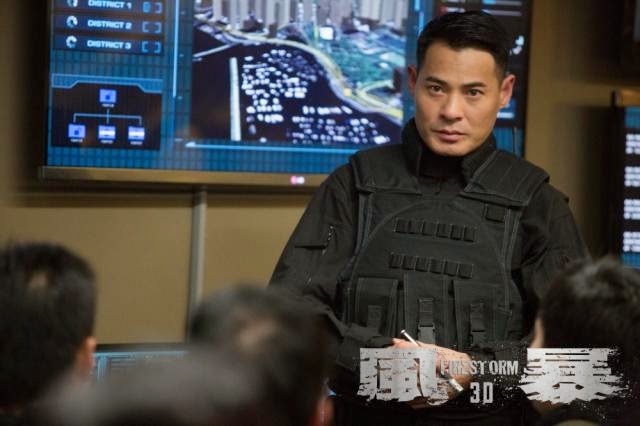 After years of hard work, Ben reaches the rank of Superintendent. He returns to the PTU for the third time, this time as its chief commander (On the First Beat). 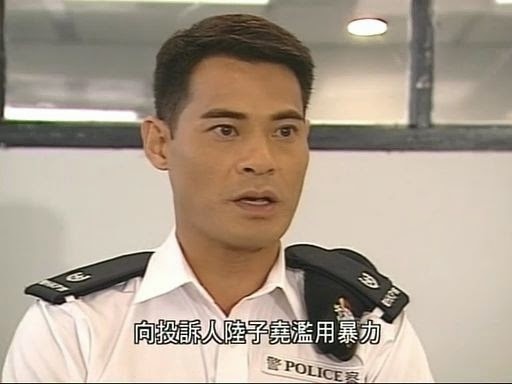 Ben brings his leadership and experience to another region of the police force (movie City Under Siege). 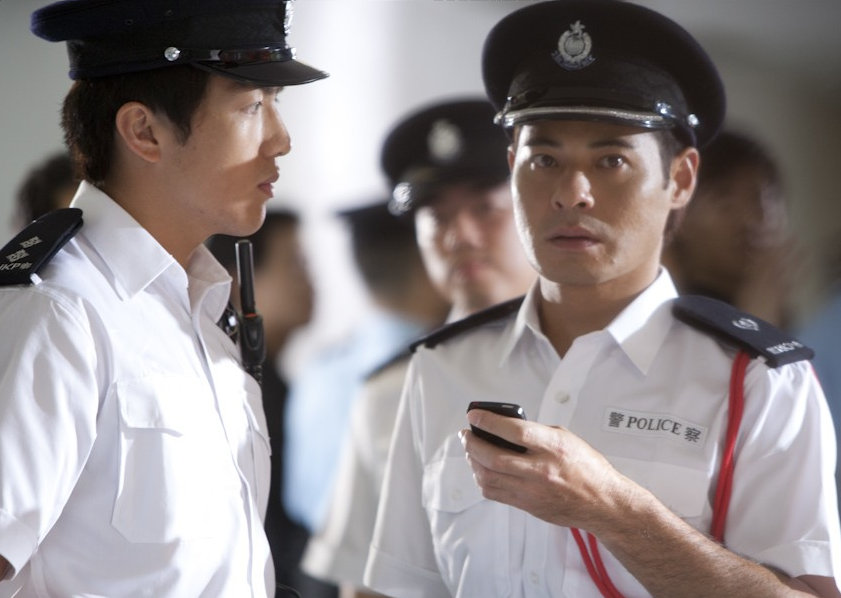 Ben's next job will be to take over the newly created Miscellaneous Enquiries unit. (Nothing Special Force)

Email ThisBlogThis!Share to TwitterShare to FacebookShare to Pinterest
Labels: A Great Way to Care, Ben Wong, Highs and Lows, Lives of Omission, Nothing Special Force, On the First Beat, Police Careers, The Threshold of a Persona, The Ultimate Addiction

A single robbery case ends up tying together the fate of three people: wheelchair barrister Roger Kwok, Hong Kong girl Kristal Tin and CID detective Ron Ng. Implicated by her boyfriend, Kristal is found guilty of conspiring to commit robbery. Even though Roger, as her defence lawyer, is unable to help her win an acquittal, seeds of love are planted between the pair. Roger helps Kristal start a new life after prison. Meanwhile, Ron discovers that Roger was the bystander that he had mistakenly shot many years ago, causing Roger to become disabled. But instead of hatred, Roger treats Ron as his friend. Ever since Roger was injured, he was abandoned by his family and had to work twice as hard to survive. He finally makes a name for himself in the legal industry and is recruited by wealthy businessmen Louis Cheung and Waise Lee. However, whenever goodness is formed, there is evil. As Roger climbs higher, Ron becomes increasingly aware of his treachery. It seems like everyone, including Kristal, is falling into one trap after another, leaving a messy dilemma...

Posted by miriamfanz at Wednesday, June 18, 2014 No comments:

The theme song for Ghost Dragon of Cold Mountain is "Journey Back" (歸途), by Fred Cheng.

The sub-theme song is sung by Grace Wong, called "She is the Best" (她最好).

Lau Kong leads a group of elite constables who investigate strange mysteries from all across the country. His position gives him authority over local magistrates and even the six ministries. Kenneth Ma, with his combination of bravery and wit, is Lau Kong's favourite subordinate. However, they go their separate ways after disagreeing on a robbery case. Kenneth and his wife Selena Li disappear for nearly ten years. When the case finally comes to an end, the aging Lau Kong orders Power Chan, Pierre Ngo and Lin Xia Wei to find Kenneth and ask him to rejoin the team.

Together, the four constables solve many mysteries together, but conflicts often arise due to their different personalities. Kenneth and Selena also experience difficulties and separate because of a misunderstanding. When Kenneth meets a prostitute (also played by Selena) who looks exactly like his wife, he feels lost and delirious. Meanwhile, the Jurchens are preparing to attack the Song Dynasty. Kenneth discovers that the Jurchens have planted a spy amongst the constables. His good friend, Raymond Cho, is unwittingly used by the Jurchens. Others subsequently fall into danger as well. It becomes difficult to distinguish between friend and enemy, leaving everyone feeling insecure...

古語有云: 中國四大美人「沉魚落雁，閉月羞花」
According to legend, China's Four Beauties sunk the fishes, downed the birds, eclipsed the moon and shamed the flowers.


Xi Shi (西施) was the beauty that sunk the fishes. Allegedly, whenever she looked into a pond, the fish will forget how to swim and sink to the bottom. Xi Shi lived during the Spring and Autumn period, at a time when her home state, Yue, was subordinate to the neighbouring State of Wu. In a bid to weaken the State of Wu, King Goujian of Yue (越王勾踐) asked his minister, Fan Li (范蠡), to present a group of beauties to King Fuchai of Wu (吳王夫差). Xi Shi was selected as part of the group and Fuchai instantly became so infatuated with her that he completely neglected his state affairs. Fuchai ordered palaces and parks to be built for her, eroding the wealth of the state. Eventually, Goujian was able to easily defeat the weak State of Wu and Fuchai was forced to commit suicide. After the fall of Wu, the common belief was that Xi Shi eloped with Fan Li to live a peaceful life on a fishing boat.

Wang Zhaojun (王昭君) was the beauty that downed the birds. Legend has it that on her journey away from her hometown, she played sad tunes that caused the birds to look down. The birds were so dazed by her beauty that they forgot to flap their wings and fell to the ground. Wang Zhaojun was a candidate to be the concubine of Emperor Yuan during the Han Dynasty. However, because she had refused to bribe the imperial artist, the artist presented the Emperor with an ugly portrait of her and she was not selected as concubine. Later, Wang Zhaojun volunteered to marry the Xiongnu leader, Huhanye (呼韓邪), to secure friendly Han-Xiongnu relations. Before departing, she appeared before the Emperor who saw her true beauty for the first time. Although he could barely stand to part with her, he could not cancel the political marriage. With the marriage, the two nations were able to coexist peacefully for 60 years. In accordance to Xiongnu tradition, she married the next leader after her first husband’s death.

Diaochan (貂蟬) was the beauty that made the moon hide itself in shame. She was the adopted daughter of the Han Dynasty minister Wang Yun (王允), who used her in a plot to defeat the evil warlord Dong Zhuo (董卓). She was simultaneously offered to Dong Zhuo and his adopted son Lu Bu (呂布), causing rift between the two men. Seizing on the opportunity, Wang Yun convinced Lu Bu to murder Dong Zhuo. Diaochan’s fate afterwards is unknown, with accounts varying from her being killed by enemy forces to being released by Guan Yu and becoming a nun. There is actually little historical evidence to support the existence of Diaochan; most of the details about her were from Romance of the Three Kingdoms. However, historical records did mention that Lu Bu had an affair with Dong Zhuo’s maid.


Yang Guifei (楊貴妃) was the beauty that made the flowers shut. She was initially married to the son of Emperor Xuanzong (唐玄宗), however, her beauty caught the eye of the Emperor and he decided to take her for himself. The Emperor went to great extents to please her. For example, he ordered the fastest horses to run in relay style to deliver fresh lychee, her favourite fruit, from a thousand miles away. He also bestowed great honours on her family, including naming her cousin Yang Guozhong (楊國忠) as chancellor. The Emperor became uninterested in state affairs and as a result of Yang Guozhong’s manipulative tactics, the dynasty was soon sent into disarray by the An-Shi Rebellion. The Emperor fled the capital, along with Yang Guifei, and was later forced to put her to death in order to pacify his angry soldiers, who saw her as the reason for the dynasty’s decline.

Review:
Put seven women together and I had expected a cat fight. Luckily, Never Dance Alone chooses a different path. It turned out to be an entertaining and heartfelt series.

For older viewers, it was a nice trip down memory lane. Watching this series with my parents, they couldn't help but share memories from their school days. Alan Tam's songs were artfully used to enhance the feeling of nostalgia. But viewers of all ages will find that they can resonate with the messages about friendship and dreams. The series was thoughtful in its examination of friendship and inspiring in its message to pursue your dreams.

The story occurs in the past and present. I like the interconnections between the two time frames, with the two generations doing some of the exact same things. The casting of the young actresses was done well. They all bare resemblance to their older versions. Their acting is better than most newbies and they exhibited a youthful energy. They were given ample screen-time, which unfortunately meant less time for the veterans.

Carman Lee was phenomenal. Never have I been so entranced by a performance. It's hard to look away from her whenever she is on-screen. Her every expression, every movement, every line delivered was perfect. Her chemistry with her on-screen husband, Lawrence Cheng, was impeccable. Not to mention her stunning beauty regardless of whatever her real age might be.

Flora Chan turned in an excellent performance as well. She carried herself with the arrogant manner of her character. Yet at the same time, she was able to make her character one that the audience would sympathize instead of hate. And her dancing was spectacular.

The other actresses also left memorable impressions with their characters. Each of them fully embodied their characters and acted in their roles without restraint. The bond between the ladies feels genuine and deep, as if they really have known each other for 20 years. I have not seen most of these actresses before and I am truly wowed by their talent.

The series is rounded off with good performances from the supporting cast. Lawrence Ng shows off his comedic side, a big difference from his normally professional image. Lawrence Cheng plays in his typical loving husband role, but as I said, his chemistry with Carman was remarkable. Miu Kan Fung was superb as the mean mother-in-law. Special mention to the maid Daisy who was seriously hilarious. Even Eliza Sam has improved to the point that her acting and accent doesn't bother me here. It was great to see the guest stars too, including Eric Tsang himself!

Birthdays of the Month - June 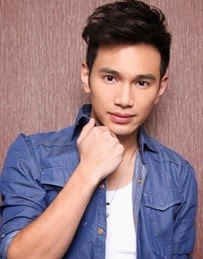