Yuan Chonghuan (袁崇煥) was a military general during the late-Ming Dynasty. He is best known for defending the Ming borders against Jurchen invasion.

As a young man, Yuan had a strong interest in military affairs. He travelled the country and frequently chatted with retired soldiers. Yuan started his career as a magistrate, but soon moved to the Ministry of War. At that time, the Ming borders were constantly being threatened by the Jurchens. On one occasion, Yuan travelled alone to the front lines to survey the situation. When he returned to the capital, he asserted that he could defend the borders if he was given the necessary resources. He was assigned to the frontier and given funds to recruit troops.

At the frontier, Yuan gained the trust of his superior and persuaded him to build a defensive line consisting of posts beyond the Great Wall. Yuan was tasked with fortifying the city of Ningyuan (寧遠). However, when a new commander took over, he changed strategies and ordered all troops to retreat to the Great Wall. Yuan refused the order and was left to defend Ningyuan with only 10,000 men. Jurchen chief Nurhaci (努爾哈赤) got news of the retreat and led an army of 130,000 soldiers to attack Ningyuan. The Jurchens laid siege on the city, but the Ming defenders fended them off with cannon fire. Yuan had reportedly spent much time studying the cannons to ensure it would fire accurately. Nurhaci suffered injuries from a cannon shot and would later die of his wounds. The Battle of Ningyuan was Nurhaci’s first and only major military loss to the Ming.

Following Yuan’s victory, he was put in charge of the forces at the frontier. As the Jurchens shifted their focus on attacking Korea, Yuan took the opportunity to rebuild the defensive line that he had envisioned. The defensive line stretched approximately 200 km, starting with the Shanhai Pass (山海關) at the Great Wall, extending to Ningyuan, and ending at Jinzhou (錦州). When Nurhaci’s successor, Hong Taiji (皇太極), led an army to invade the Ming border, he was repealed by the defense forces in Jinzhou and Ningyuan, proving the effectiveness of Yuan’s strategy.

Despite scoring a second major victory against the Jurchens, Yuan was forced into retirement by the eunuch faction, who sent criticisms of Yuan to the emperor. However, Yuan was recalled the next year by the newly-enthroned Chongzhen Emperor (崇禎帝). He was given full authority for military affairs on the frontier. Using this authority, he executed a Ming general named Mao Wenlong (毛文龍) on charges of corruption. Mao was a general that was stationed in the Korean Peninsula. His position kept the Jurchens in check because if they attempted a massive invasion of the China proper, they risked an attack by Mao on the eastern front. But Yuan likely despised Mao’s arrogant behaviour and spending, or perhaps felt threatened by him. Mao’s execution caused the Chongzhen Emperor to be dissatisfied with Yuan.

The elimination of Mao provided the Jurchens with a prime opportunity to attack. This time, instead of attacking in the northeast region where Yuan was stationed, Hong Taiji travelled through Mongolia and attacked in the west. It marked the first time the Jurchens were able to breach the Great Wall. They reached the walls of Beijing before Yuan arrived with reinforcements to drive them away. Subsequently, Hong Taiji spread rumours that he had colluded with Yuan. Already unhappy with Yuan over the execution of Mao, the Chongzhen Emperor ordered for his arrest and sentenced him to death by slow slicing.

After the death of Yuan, the Ming army was no longer able to contain the Jurchens. The Jurchens breached the Great Wall several more times, causing countless deaths and plundering the region. The Ming Dynasty was thrown into disarray and would soon fall at the hands of rebels.

Yuan was posthumously cleared of treason during the Qing Dynasty.

Email ThisBlogThis!Share to TwitterShare to FacebookShare to Pinterest
Labels: A General A Scholar and A Eunuch, Edwin Siu, Historical Context

The theme song for The Tofu War is "The Sun at Home" (家中的太陽) by Nancy Sit.

Posted by miriamfanz at Wednesday, August 30, 2017 No comments:

Nancy Sit, who has served three generations at a century-old tofu factory, uses her position as general manager to protect her distant relative, Dominic Lam. It draws the ire of the heir, Jonathan Cheung. Coincidentally, his friend Chris Lai lost his job and broke up with his girlfriend (Elaine Yiu) and is looking for a change. The two of them click instantly and decide to institute major reforms at the company. The new and old camps battle against each other day and night. Chris re-encounters his childhood friend Roxanne Tong and vents about his problems to her. Their relationship grows quickly and they begin to think about marriage. But it turns out Roxanne's mother is Nancy. Roxanne pretends to be depressed to force her mother to agree to her lightning marriage to Chris. But if seeing each other is hard, living together is even harder. After marriage, Chris faces extreme pressure at home and at work. He tries to play matchmaker for his mother-in-law and the tofu factory's boss (Wai Lee) to deflect the line of fire. Unfortunately, it is a mismatch with many setbacks, leading to a series of jokes...

Posted by miriamfanz at Monday, August 28, 2017 No comments:

The theme song for The Unholy Alliance is performed by Ruco Chan, entitled "Trigger On" (一觸即發).

The sub-theme song is "Season of the Wind" (風的季節), by Rosanne Lui.

Posted by miriamfanz at Saturday, August 12, 2017 No comments: 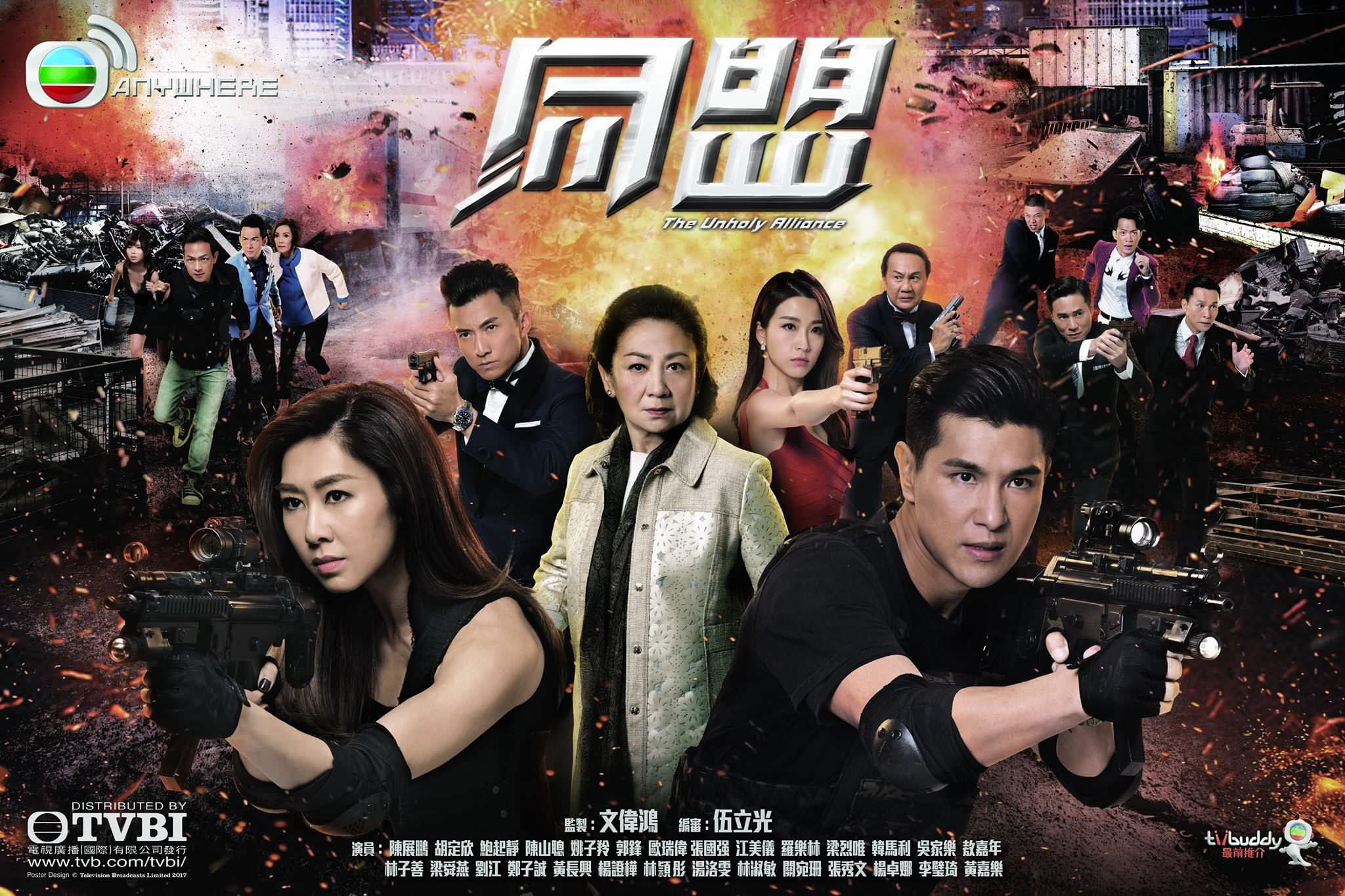 A keen surfer, Ruco Chan settles in Taiwan, operating a hostel, when he is suddenly attacked by a group of assassins. Ruco is saved by the agile backpacker Nancy Wu, but his adoptive mother is killed. Ruco returns to Hong Kong to search for the truth. His friend Oscar Leung pulls some strings for him and he learns that his adoptive mother's death is linked to Nina Paw. Nina is an iron lady who leads many powerful interests. A single decision is enough to influence the economy and livelihood of society. Her adopted son (Joel Chan) and his wife (Elaine Yiu) are her advisers and Nancy is her personal bodyguard. But Ruco's appearance causes major changes to everyone's relationships. All the powerful interests with close ties to Nina are waiting for an opportunity to act, putting Nina's life in danger. Although Nancy and Ruco join together to fight back, it triggers another wave of bloodshed that threatens the safety of society...

Posted by miriamfanz at Monday, August 07, 2017 No comments: