Never visited TVB City and want to have a peek inside? No fear! All you need to do is watch TVB’s dramas. TVB effectively uses every part of its grounds for productions.


For example, the lobby of the main building is very versatile. In Tiger Cubs, it stood as two different locations – the hospital where Kenny Wong was hiding and the hotel housing the rich kids. In Ghetto Justice II, it was used as the corporate office of the pharmaceutical company that was selling tainted medication.
﻿

Meanwhile, a shot from above offered a refreshing view of main building. No one can whether it is TVB's office building or an hotel.

Another commonly seen place is the garden outside the second floor restaurant. It made an appearance in almost every episode of The Hippocratic Crush, where doctors and nurses went in and out of the hospital. In Ghetto Justice II, this is where KK Cheung punched Kevin Cheng when Christine Kuo was hospitalized. 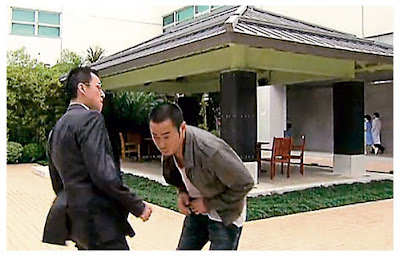 The restaurants connected to the garden also make frequent appearances. The group of doctors in The Hippocratic Crush always hang out in the Western restaurant. On the other side, there is a Chinese/Western restaurant occupying two levels. In Wish and Switch, this was the fast-food restaurant that Johnson Lee worked at. The cafeteria of the police headquarters in Witness Insecurity is actually the top floor of the restaurant. 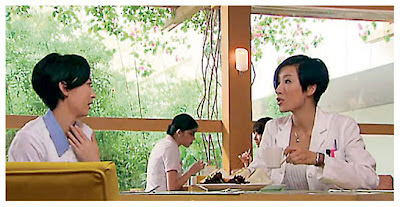 Article and Photos source
Posted by miriamfanz at Tuesday, October 09, 2012