The Confidant and Curse of the Royal Harem Connection

Here’s how Curse of the Royal Harem connects with The Confidant.

Sunny Chan was the Daoguang (道光) Emperor in COTRH. Jessica Hsuan was his (third) Empress. She bore a son, which was still an infant in COTRH. Nancy Wu was a concubine of Sunny and died in a fire in COTRH.

In reality, Nancy's character outlived Jessica and was named Sunny’s fourth Empress. One of her sons is Prince Gong (恭親王), portrayed by KK Cheung in The Confidant.
-     Nancy is a palace maid in The Confidant.
-      In COTRH, KK was the loyal eunuch of Gigi Wong (Sunny’s step-mother). He committed suicide alongside Gigi.
-     Prince Gong is a character made popular by Chinese drama Sigh of His Highness.

Oscar Leung is Michelle’s son and succeeds his father Xianfeng (Jessica’s son) as the Tongzhi (同治) Emperor at age 5. He marries Natalie Tong, a relative of Ci’an (Maggie).
-     KK’s Prince Gong is the uncle of Oscar.
-     I assume most of The Confidant takes place during Oscar’s reign.

Tongzi (Oscar) dies childless at age 19 and the throne was passed to his 4 year-old cousin, the Guangxu (光緒) Emperor. Guangxu was the nephew of Cixi (Michelle), which was why she chose him as successor.
-     Guangxu’s father is the 1st Prince Chun, 7th son of Daoguang (Sunny).
-     Imperial convention requires that the throne be passed from one generation to the next, but Tongzhi (Oscar) and Guangxu were cousins of the same generation. Thus, in legal terms, Guangxu was named as successor of Xianfeng’s (Jessica’s son) throne, not Oscar's.

Guangxu was controlled by Cixi for his entire reign, dying just one day before her. Some say he was actually poisoned by her. He is succeeded by his 3 year-old nephew Puyi, the Xuantong (宣统) Emperor, also the last emperor of the Qing Dynasty.

Confusing? Maybe a diagram will help. 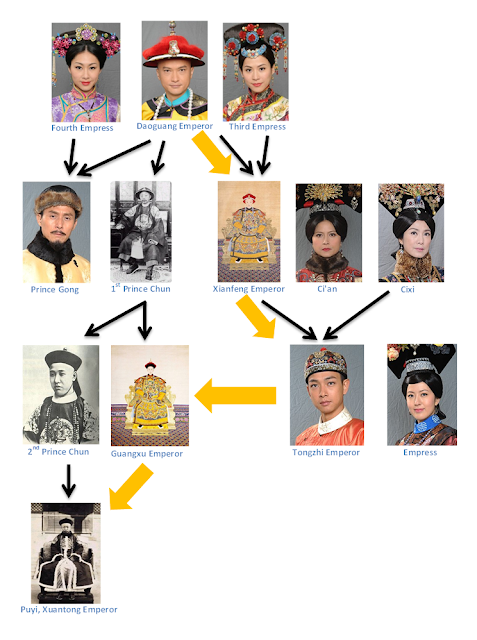 As an aside, in connection to an earlier Qing Dynasty drama, Life and Times of a Sentinel, two emperors were portrayed in that series. Sunny Chan was the Shunzhi (順治) Emperor and Power Chan was his son and successor, the Kangxi (康熙) Emperor. Daoguang (Sunny in COTRH) is the direct descendant of these two emperors.
-    In The Confidant, Power is the personal eunuch of Oscar, the Tongzhi Emperor.

Posted by miriamfanz at Saturday, November 03, 2012