Empress Dowager Cixi (慈禧太后) was a concubine to the Xianfeng Emperor and rose to prominence by giving birth to his only surviving son (the future Tongzhi Emperor). She acted as regent for the Tongzhi and Guangxu Emperors, allowing her to be the de facto ruler of China for 47 years. She is most often blamed for the eventual demise of the dynasty, due to her iron-grip on power and anti-reformist tendencies. However, some historians view her as being used as a scapegoat for problems beyond her control.

During Tongzhi’s reign, she had several achievements, such as quelling the Taiping Rebellion, overhauling the corrupt bureaucracy and allowing certain reforms. All of these led to a period of relative peace and prosperity known as the Tongzhi Restoration. During her early rule, Cixi was more open towards foreign influences, however when she saw that it posed a threat to her power, she quickly shut it down.

It is during Guangxu’s reign where her actions are far more controversial. With Ci’an and Prince Gong out of the picture, Cixi’s power was almost unchecked. She is accused of squandering public funds (or at least not preventing it) in order to rebuild the Summer Palace in celebration of her 60th birthday. The funds had been diverted from the military, causing the poorly equipped Qing navy to lose in the First Sino-Japanese War. When Guangxu came of age to rule on his own, Cixi delayed the handover of power and issued an edict allowing her to “advise” him indefinitely. When he attempted the Hundred Days Reform, she staged another coup to seize power once again and placed the Emperor under house arrest. Critics disagree whether this action was justified as the overly ambitious reform measures would have destabilized China or whether Cixi acted purely in her self-interest.

Cixi died one day after the Guangxu Emperor was poisoned. Many people believed Cixi was behind the poisoning, fearing that he would continue his reform policies after her death. As her final act, she installed Guangxu’s nephew, the 3 year-old Puyi, as the next Emperor. 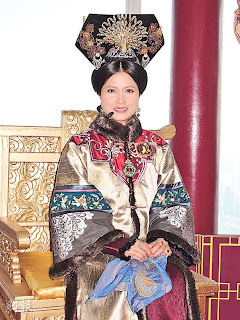 Empress Dowager Ci’an (慈安太后) was the Empress Consort to the Xianfeng Emperor. After the Xinyou Coup, she was made co-regent to the young Tongzhi Emperor. Although Ci’an technically has precedence over Cixi in all respects, her more passive character lost out to Cixi’s ambitious, overbearing ways. Not that it mattered since the quiet Ci’an was said to have favoured literature and arts over politics. Her gentle nature made Tongzhi prefer her over the strict Cixi. After Tongzhi’s death, Ci’an continued as co-regent for the Guangxu Emperor until her own death. Her death occurred suddenly due to a stroke, although the unexpectedness of her death gave rise to speculations of foul play linked to Cixi. Rumour has it that the Xianfeng Emperor had given a secret edict to Ci’an prior to his death, ordering Cixi to be executed if she tried to overstep her power. After this was revealed to Cixi, Ci’an was tricked into burning it and died shortly afterwards.


Listening Behind Curtains
Cixi’s rule over China made famous the phrase 垂簾聽政 (listening behind curtains). The reason for the curtains is two-fold. First, it was inappropriate for the Emperor’s wives to come into contact with other men, therefore the curtain was necessary to provide physical separation. Second, Qing imperial tradition forbade females to be involved in politics, thus the curtain served as a symbolic separation between the Empress Dowagers and the imperial court.