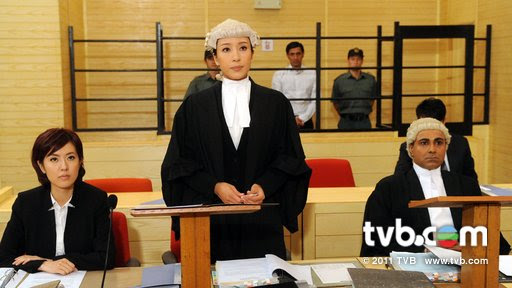 There are many television legal dramas, but the fictional plots can falsely misled audience. For example, the simple line of “Objection, 法官大人” actually has two errors. The Department of Justice (DOJ) is concerned that the errors in TV court scenes will cause citizens to misunderstand their legal rights and has arranged to conduct classes for producers and scriptwriters, in hopes of rectifying the inaccuracies.

Beloved legal dramas are inconsistent with reality, so prosecutors will visit TVB City to explain legal procedures and the basic work of lawyers. One lawyer pointed out common errors in TV court scenes. Under the principle of equality before the law, there is no “大人” and “小人” (as this indicates the existence of a class system). The term “法官大人” has no longer been used since the Handover of HK. Court officials will often use the term “法官閣下” when referring to the judge as a sign of respect.

In court scenes where lawyers fiercely oppose each other, the sound of “Objection” is frequently heard. The lawyer will then walk in front of the witness and jury to argue their point. In reality, trials proceed in a polite manner; lawyers will only express their opinion, present evidence and rebut arguments from their seat and would not shout out “Objection”.

TVB Deputy Director of External Affairs Tsang Sing Ming said TVB’s legal dramas have never received complaints for being unrealistic. He confirmed that prosecutors are conducting seminars at TVB City, but it is not due to dramas being unrealistic. He explained that the Drama Department’s research team will often invite disciplinary forces, government agencies and other organizations to share their work processes and experiences so as to guarantee accuracy in dramas. “Every time we complete a lawyer, firefighter or police drama, a lot of people wish to join the profession. This proves that dramas are realistic enough and are beloved by the people.”

Last year, the legal drama Ghetto Justice was well-received and currently re-airing in a late night slot. The sequel is to be released at the end of this month. In regards to the DOJ’s seminars at TVB City, Ghetto’s producer Tommy Leung said “Always welcome learning. In fact, every time I shoot a lawyer or doctor series, I will always ask consult with the professionals, will not just make things up. But if the DOJ shows concern, it is a good thing, no reason to be unwelcoming of their advice.”

TV court scenes often exaggerate reality, leading to doubts about the efforts put into proper research. But scriptwriters and producers explain that besides reflecting reality, court scenes must also be dramatic, therefore will be exaggerated. They welcome the seminars to provide more legal knowledge.

A TVB scriptwriter expressed that TVB has demanded higher quality of research in recent years. For court scenes, they will ask for lawyers’ advice or even personally attend court proceedings in order to increase the realism. But he explains that, in consideration of dramatic effects, some things will be exaggerated. For example, lawyers do not really have to shout out their objections, but doing so will increase the tension.

The scriptwriter used the popular Ghetto Justice as an example, pointing out that a lawyer investigating the case was unrealistic, but it is simply a dramatic device. He added “Court is not a rigid place, sometimes absurd things will occur. Judges will laugh and insult people, so anything can actually happen.”

Will venture into grey areas

Producer Gary Tang of the hit series Files of Justice believes there must be a balance between realism and drama: “When I was shooting Files of Justice, I will consult many friends in the legal profession. If a particular event could not possibly occur under the law, we will give it up. But if there are grey areas, then we will go for it. If we were shooting real court scenes, it will bore people; filming must have drama after all.”

Error: References
Example: Dramas often refer to the judge as 法官大人 instead of 法官閣下; often calls “Department of Justice” as “Legal Department”

Error: Lawyer’s responsibilities
Example: Lawyers in dramas will take the role of detective and collect evidence, but this should be the responsible of the police

Error: Shouting “Objection”
Example: Hong Kong follows the British judicial system; even when lawyers believe the opposition’s arguments are wrong, they will not shout out “Objection”. They will only stand to express their opinion.

Error: Positioning in court
Example: Lawyers should stand at their seat to question witnesses and not walk in front of the witness or jury to speak.

Error: Order of questioning
Example: In proper procedure, the prosecution will first describe the case, call on prosecution witnesses and then defense witnesses will appear in court. The order of appearance for witnesses is often mixed up for dramatic effect.

Comment:
In The Other Truth, Tavia was not approving about Ruco's habit of overstepping boundaries to investigate cases on his own. A lot of TVB dramas have lawyers, forensics, reporters, psychologists - everyone but the police - solving cases. TVB is currently filming Justice Attack (Michael Tse, Tavia Yeung). We will see how well TVB learns.

Email ThisBlogThis!Share to TwitterShare to FacebookShare to Pinterest
Labels: Friendly Fire, Ghetto Justice, The Other Truth