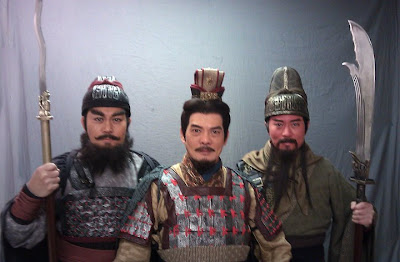 Liu Bei is the distant uncle of Emperor Xian of Han (漢獻帝), which is why he is called 劉皇叔 by the people. However, some historians have questioned Liu Bei’s lineage and speculate that it is merely a way to legitimize his claim to the throne. Liu Bei was known to be a benevolent ruler who cared for his people. After one defeat at the hands of Cao Cao, Liu Bei refused to abandon 100,000 citizens in his escape despite putting himself at great risk. Liu Bei “revives” the Han Dynasty when he created the Shu Han state.

Kwan Yu is a general serving Liu Bei. He is revered for his loyalty. Even when captured by Cao Cao, his insisted on returning to Liu Bei. The phrase 過五關斬六將 comes from the legend of how Kwan Yu escaped from Cao’s territory to return to Liu Bei. Kwan Yu is worshipped in modern HK by many, including both the police and the triads. He is classically portrayed with a red face and long beard, holding his weapon, the Kwan Dao (關刀).

Cheung Fei is also a general in Liu Bei’s camp. He has a reputation as a courageous, able warrior. In one battle, he single-handed scared off Cao Cao’s large army by standing in front a bridge, daring anyone to challenge him.

Chiu Wan is another general under Liu Bei. He is brave and perhaps best known for his physical strength. In the same battle in which Cheung Fei warded off Cao Cao’s army, Chiu Wan travelled alone towards Cao Cao’s camp to rescue Liu Bei’s wife and young son.


Zhuge Liang is a strategist for Liu Bei and regarded as one of the most brilliant strategists in history. Liu Bei’s former strategist Tsui Su recommended Zhuge Liang to replace himself when he was forced to join Cao Cao’s side. Liu Bei visited Zhuge Liang’s home three times before successfully persuading him to act as his adviser. This is the famous story called 三顧茅廬 . Zhuge Liang came up with the Longzhong Plan, in which he advised Liu Bei to secure the western territory and foresaw the separation of China into three states. He deployed numerous brilliant tactics to help Liu Bei in his quest to restore the Han dynasty, which will surely unfold throughout the rest of the series.

Check out other Historical Context posts!