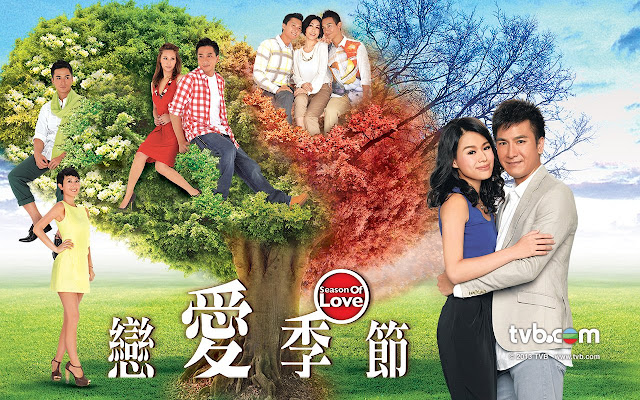 Review:
In a series that was supposedly about love, there was little discussion about what love is.  The only time there seemed to be any discussion was in the autumn story, with the talk about the importance of honesty in a relationship. Also, for a series about love, there was poor development of the romantic relationships. In at least 3 of the 4 stories, the two leads just miraculously ended up with each other in the final minutes of their story. It is hard to develop a real liking of any of the pairs because there’s never any emotional connection.

Perhaps the short length of each story didn’t allow for its proper development.  However, if there’s anything I liked about this drama, it’s the format of it. Four short stories, five episodes each. It keeps things refreshing, the plot doesn’t drag on forever and if I’m ever bored, there’s always the option of skipping ahead (mind you, I didn’t skip though).

Spring: This story was familiar from all angles: the rivals to lovers development, the difference of social status, the misunderstood character. I don’t think Him and Toby look good as a couple. Their age difference looks to wider than what it should be. Their performances were not inspiring either. Toby looked flat and tired. Him had nothing to show except for his muscles. Kandy Wong, who played Toby’s little sister, was annoying with her constant cries of “Season BB!” All in all, the spring season was the most boring of the four.

Summer: This story was slightly better than spring because of the suspense factor. Someone is causing trouble for Kate and the trouble doesn’t stop even after one perpetrator is caught. Watching things unfold was interesting, but the ending was rather disappointing. Turning Kate’s fiancé into a psycho was a quick way out for the scriptwriters who needed to get Kate and Ron together. Not to mention convenient advertising for the upcoming A Great Way to Care 2. Again, nothing too special with this season.

Autumn: This season is the most thought-provoking of the four. The central question is: does fate or character determine one’s life? The series uses three parallel stories to try to arrive at a conclusion. In the first two tries, Nancy’s attitude led to bad endings, no matter who she was married to. What’s interesting though, is that in the third time, even with a changed attitude, she didn’t necessarily have a smooth, desirable life either. Fate spurred events that would lead to her husband cheating on her. Although she finally has a happy ending, it still begs the question: which is the controlling factor, fate or character? Philosophical question aside, I liked this story because you don’t actually know who Nancy will end up with until the very end. That kept me more interested in this story than others because in the other seasons, the audience had full knowledge that the two leads will end up being together regardless of what goes on for 5 episodes.

Winter:  This story probably had the best development in terms of the relationship (“best” being in relative terms). It went through the whole process, from Kenneth chasing after Myolie, the budding romance, the misunderstanding and break-up, the “still have each other in their hearts” stage and finally, the reconciliation. Mixed in between is a search for the truth about one’s own history. The answer isn’t likely to be surprising, although I was thinking of another possibility. The minor flaw is the lack of continuity or explanation from Kenneth’s previous appearances. He appeared to be extremely mysteriously in previous stories, but there were no remnants of that mysterious character in this story. Also, at the end of ep.5, there was a picture of Kenneth and Myolie together, which points to an already existing relationship, but their story starts off with them meeting for the first time.