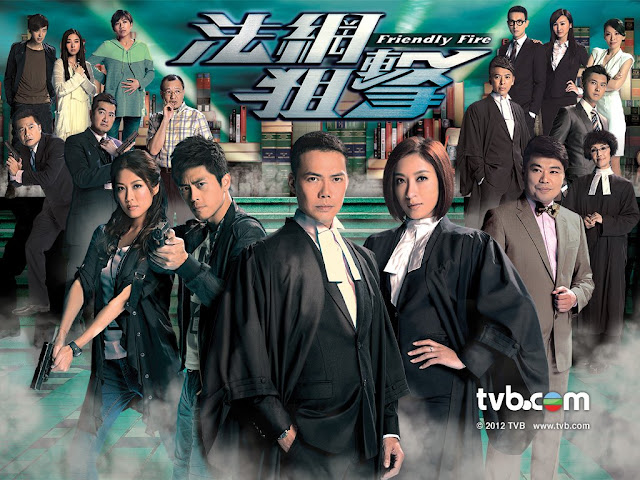 Plot: Crime happens and the prosecutors from the Department of Justice need to make sure justice is served. But we all know justice will always be served in the end anyways because it’s a TVB drama. (Actual overview is here)

Review:
If there’s one word to describe Friendly Fire, it’s “predictable”. From the romantic story lines to the cases, nothing ever jumps out as a surprise. Yet the way in which things were woven together breathed some life into the series. There was a right balance of cases, romance, comedy and touching scenes to keep everything moving along. It also helps to have a refreshing cast, with new faces such as Sammy Leung, Alice Chan and the trainees.

There have been a lot of legal dramas in recent memory, so what makes Friendly Fire different? Perhaps it’s all the legal flaws. Netizens actually discovered an instance where they were citing a law that didn’t exist. Although I don’t want to be nit-picky, it highlights the lack of research effort. Minor details aside, the series ignored some obvious legal procedures. For example, one cannot introduce new evidence in their closing arguments, but this drama allows that anyways. Lawyers cannot propose random theories in court (at least not without the objections of the opposition), but the prosecutors will only lament about Derek Kwok’s “dirty” tactics but never yell out "Objection" in court when he offers fabricated, unsupported theories to the jury. In certain cases, there was only flimsy evidence supporting a conviction, but the bad guy goes to jail anyways. Anyone who’s watched enough legal dramas should know that the standard of proof for criminal cases is beyond a reasonable doubt. All in all, if you want to be a lawyer, don’t rely on any of the legal advice shown here.

There weren’t any breakout performances here. Michael’s character is witty, intelligent and driven by the sense of justice. Yep, sounds exactly like Laughing Gor, except in a three-piece suit. The only difference would probably be that he is slightly less arrogant and shows some vulnerability (like the rooftop crying scene). Tavia’s character was essentially the same as her role in The Other Truth, but there was more time devoted to her personal life, allowing her to show a more relaxed, friendly side. I actually enjoyed the relationship scenes between Michael and Tavia at the beginning when they were a sweet couple. They were loving, but not in the mushy way that would make you want to barf. They enjoyed teasing each other and pulling surprises, like when Tavia arranged for Michael’s ex to seduce him (what kind of girlfriend does that??). But then it got to the part where Tavia rejected Michael’s proposal because of the risk of a hereditary illness, and I let out a big groan. That has got to be the lamest, most overused way to break up a couple.

The second main pairing was Sammy and Sharon, which follows the typical “bickering to mutually supportive to lovers” pattern. Their scenes together often had comical results. This was Sammy’s first time in a TVB drama, and he was natural and humorous. (To be fair, it's not exactly his first acting stint either.) There was no challenge for Sharon to play the easygoing, kind-hearted girl. I felt her real purpose in the drama was to pull in audience with her body, whether it’s the wet-bra scene or flaunting her long legs. By the way, TVB tried way too hard to use sex appeal in this series. Sammy threw in his own soapy nakedness scene and there was also Alice, Grace and Samantha showing off their sexiness in various ways.

The main villains were Alice Chan and Derek Kwok. Alice performed admirably. She is the “stop-at-nothing” type that I love to watch because of the intrigue factor. Derek, on the other hand, was edging towards exaggeration with his wide hand gestures in court. Despite that, I feel he is the only good lawyer in this series, because he objects or intervenes at appropriate times and is able to point out reasonable flaws in the opposition’s arguments.

As for the other characters: Louis Yuen didn’t really add much to the story. It’s funny how his name is a play on Louis Koo’s name. The trainees didn’t get that much screen time. Their existence was just to make a greater emotional impact for the rape case. In the end, I still couldn’t put name to face, except for Oscar Leung and Samantha Ko’s characters. Half of Oscar’s screen-time was to look angry. Meanwhile, Samantha seemed too cheerful for someone who just suffered through such a traumatic event. Also, when she has a long set of dialogue, it sounds flat, as if she’s reading from a book. Her English pronunciation needs work, like when she said “Department of Jus-tick”. There were some notable guest stars for individual cases. Mandy Wong was playing a Mainland version of “Kwan Yi So” (from L’Escargot) and she is still as good. I thought Christine Kuo actually had a role in the drama, but it was only a guest appearance. Hey, I’m not complaining though. And whatever happened to Vincent Wong’s fraud case?

Final note: I still don’t understand the meaning of the English title in the context of this series.

Related posts:
Inaccuracies in Legal Dramas
Overview and Preview of Cases
The Trainees - with their rendition of "Be True"
Theme Song
TVB's Lawyers - plus description of court system & role of legal professionals

Posted by miriamfanz at Saturday, February 16, 2013