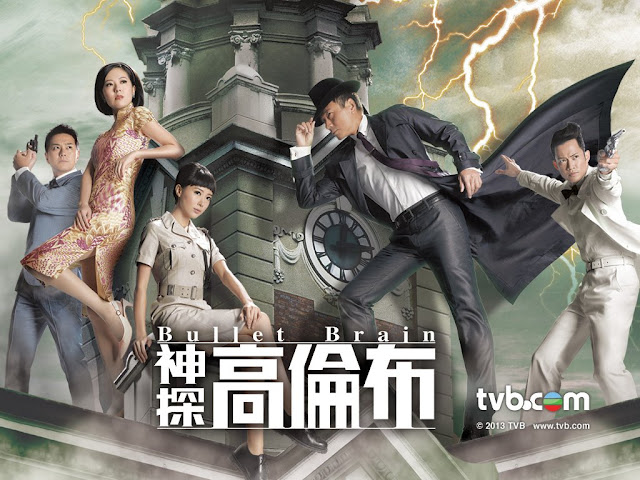 Plot: A brilliant detective goes head-to-head against criminals and outsmarts them at every turn to keep Hong Kong safe. But I must have accidentally flipped the channel to another series about schizophrenia, stupidity and the supernatural.

Review:
The problem with this series is not with storytelling. Some viewers may have found it confusing that the backstory is given in separate parts, but it is actually quite straightforward. We know the brilliant Detective Columbo used to be very dumb but nice. Something happened to make him smart yet arrogant, but that something isn’t revealed right away. Simple.

No, the problem is with the story itself. First, this "detective" series isn't about solving cases, but Lee Tim Sing already warned about that before its release. What I had expected was a battle of wits between Wayne and Pierre since that was how the series was advertised. The battle of the wits never happened. Actually, if you really think about it, Wayne with IQ of 283 was outsmarted by Pierre with IQ of 203 most times, but he got lucky. Still, we got a weird lighting fighting scene, if that helps.

What this series turns out to be is Wayne and Pierre taking turns vowing to help the other find their “conscious” back. Why is this so important anyways? The idea might sense for Pierre’s character since he was clearly evil. But for Wayne... sure, he was one arrogant bastard, but he was not evil. Aside from the bank manager case, nothing else he did was immoral, so I don’t understood Pierre’s desperateness to “save” Columbo by changing him back to the stupid Dai Hei.

Further adding to the problem with this series is the heavy focus on Sire Ma. She is, by far, the most annoying, immature, dumb madam EVER!! “9527, this is an order!” *teary-eyes* “Bo Bo!” Goodness, can someone explain to me how she could have been an elite graduate from Scotland Yard? And someone please tell Tim Gor that this diary thing is an absolute drag (recall Fala Chen in No Regrets?)

There are three versions of Wayne Lai in Bullet Brain and he performed well in two of them. As Columbo, he was absolutely despicable and displayed so much arrogance. You want to wipe that smug look from his face, which is exactly what Columbo is – the most hated man at the police station. As Dai Hei, he was a shy and innocent man. He shows the character’s insecurity as he tries to hold onto everyone’s hand. Wayne is able to draw a clear distinction between the two characters so that the continuous flashbacks are not confusing. Where he goes downhill is when he regained his memory and intelligence in the second half of the series. As Dai Hei x Columbo, all he did was look constantly worried or grieving.

Pierre Ngo did well until his character became smart and evil. After that, he was overly exaggerative in a bad way. While Wayne’s exaggerative gestures was to show Columbo’s arrogance, Pierre just came off as crazy. His hair and his laugh were plain weird.

Sire Ma… No words can describe my frustration with her. No doubt that her annoying character makes it easy to hate on her, but her acting definitely contributes to the annoyingness. A lot of times, she just stands there as stiff as a stick. Her emotional scenes need work and her pronunciation could see improvement.

Edwin Siu was the stereotypical good guy. There’s nothing special about him, except I would have loved it if he could slap some sense into Sire. Actually I thought he would have ended up with her, but instead Sire gets to be with her “Bo Bo”, which makes no sense whatsoever.

Natalie Tong was the shining star in Bullet Brain. She was very, very convincing as a deranged lady and she can easily make the switch to “normal” 40-year old in front of others. The last scene before her death was so touching that I actually got teary-eyed. She was even better than Wayne in that scene. Playing the daughter role, her best scene was when she sat with a slightly satisfied smile after pushing Pierre out of the car. This is definitely a breakthrough for Natalie; a pity she was cast aside in favour of Sire.