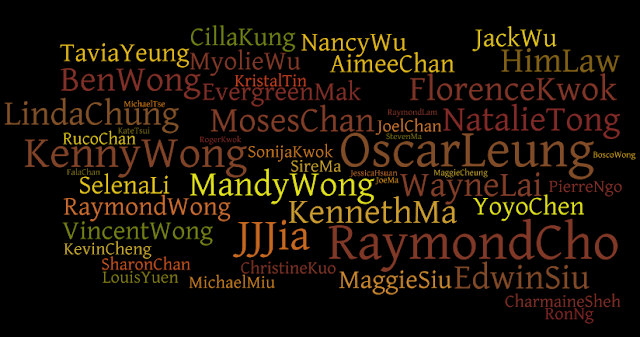 This year is most certainly a breakthrough year for Oscar. He went from a small-time actor to being a household name and has a high chance to take home the Most Improved Award at this year’s awards ceremony. His popularity rose with the role of “Kwan Yi Gor” in L’Escargot. He followed up with strong performances as the official historian in Queens of Diamonds and Hearts and Linda Chung’s dance-loving brother in House of Harmony and Vengeance. Oscar captured the hearts of the audience with his portrayal of the winking sniper “Chong Cheuk-yuen” in Tiger Cubs. His character even made a special guest appearance in Highs and Lows. In the anniversary series The Confidant, Oscar has lots of room to show his acting chops as the Tongzhi Emperor.

2012 has been Raymond Cho's most fruitful year to date, being featured in 6 series. He started the year off playing Niki Chow’s brother in Bottled Passion. Then he had the role of a heart surgeon in The Hippocratic Crush. Next, he was the ex-lover of Sharon Chan in Queens of Diamonds and Hearts. He was the disposed king "Lee Hin", son of Wu Zetian (Rebecca Chan) in The Greatness of a Hero. He joined the cast of Ghetto Justice 2 to replace Eddie Kwan as the silly policeman in the series. Finally, he has a highly prominent role of "An Dehai" in the anniversary series The Confidant.

Kenny has always been a reliable supporting actor. He was one of the main characters in When Heaven Burns and even tried his hand at singing the sub-theme song. He was paired with Elvina Kong in Let It Be Love. He was the gym owner in Gloves Come Off and the personification of Moses Chan’s evil in Master of Play. In Tiger Cubs, he was a loving father and in The Last Steep Ascent, he was the ever-supportive friend of Moses Chan and husband of Aimee Chan.

Kenneth has successfully established himself as a first-line siu-sang at TVB. He gained legions of fans with his role of “Yat Kin” in The Hippocratic Crush. He shaved his head to be the “King of Thieves” in Tiger Cubs, then travelled back in time in Three Kingdoms RPG. In the anniversary series Silver Spoon, Sterling Shackles, he is the son of Damien Lau. Recently, Kenneth captured the Favourite Actor award at the Astro Awards and has a chance to do so again at the upcoming TVB awards.

Linda topped TVB’s first-line actresses with the most productions this year. She took a departure from her normal good girl roles in L’Escargot, where her character was unfavourable for her relationship with the married Michael Tse. But she came back with a positive role in Daddy Good Deeds. She played a semi-villain in House of Harmony and Vengeance while displaying her elegant dancing. Her role as the depressed “Hailey” in Witness Insecurity was her representative work of the year.

4 series, 4 different roles for Moses. Coming off comedic roles from previous years, Moses was once again serious in When Heaven Burns opposite of Bowie Lam. In Let It Be Love, he plays an ordinary Mongkok guy in love with an international superstar. In Master of Play, he was a serial killer battling against his own five personifications. In The Last Steep Ascent, he was a caring, romantic man who always stood by Maggie Cheung’s side. Recently, he won an award at the Asian Television Awards, gaining international recognition for his acting abilities.

Fresh off being named Best Supporting Actor last year, Ben Wong was looking for another stellar year. He had lesser roles in When Heaven Burns as Charmaine Sheh’s ex-husband and The Greatness of a Hero as the leader of the Turk tribe. In The Hippocratic Crush, he was Kenneth Ma’s superior. In Queens of Diamonds and Hearts, he played a comedic villain trying to usurp the throne. His portrayal of the ultimate evil “Poon Sir” in Highs and Lows was greatly praised by the audience. He followed that with a performance as the sentimental ex-lover of Idy Chan in Silver Spoon, Sterling Shackles. With a strong year like that, it is a wonder why Ben was not nominated for any TVB awards.

Florence has been a constant presence on screen this year in the sitcom Come Home Love. Besides sitcoms, she was Charmaine Sheh’s manager in Let It Be Love and Katy Kung’s sister in Gloves Come Off. The role of a ruthless office executive is no stranger to her, but in No Good Either Way, she pulled it off in an entertaining way. Finally, she was the evil concubine in King Maker, plotting to install her son Chris Lai onto the throne.

Mandy is being touted as the next top fadan. She dropped her image of the shy, glasses girl from her early career to be the loud housewife “Kwan Yi So” in L’Escargot. She portrayed successive strong career-oriented roles as an ambitious doctor-trainee in The Hippocratic Crush and the first female SDU team member in Tiger Cubs. Her pairing with Him Law in Divas in Distress was well-liked by audience. Her year would end off perfectly if she can win an award at this year’s awards ceremony.

Natalie has had increasingly more opportunities since winning the Most Improved Award in 2010. In Gloves Come Off, she was partnered with Raymond Wong. She developed a relationship with Jason Chan in No Good Either Way. The role of a crazed psychologist in Tiger Cubs was a refreshing experience for Natalie. In King Maker, she was Wayne Lai’s long-lost sister and later became Pierre Ngo’s concubine. She upgraded from concubine to Empress in The Confidant.

Despite JJ's accent when speaking Cantonese, it certainly hasn’t hindered her acting career. She was able to win over Ron Ng in L’Escargot. In House of Harmony and Vengeance, she was a semi-villain and conspired with her L’Escargot love opponent Linda Chung. She was quite noticeable with her red wig in Tiger Cubs as the wife of the “King of Thieves” Kenneth Ma. She transformed into a nice girl again in Ghetto Justice 2 and was Sam Lee’s caring girlfriend. In Silver Spoon, Sterling Shackles, she is the 5th woman in Damien Lau’s life.

Posted by miriamfanz at Saturday, December 08, 2012