The Revenge of Savio Tsang

Wu Youji (武攸暨) was a nephew of Wu Zetian and second husband of Princess Taiping. His marriage to the princess came about after her first husband was put to death for treason. Wu Zetian decided to marry Princess Taiping to Wu Youji to strengthen the ties between the Wu clan and the imperial Li clan. However, he was already married at that time, so Wu Zetian had his wife secretly killed to allow the marriage to proceed.

Wu Youji was a kind and unambitious man who largely stayed out of politics. He and Princess Taiping had two sons and a daughter. He died of illness shortly before the end of Emperor Ruizong's second reign.

In Deep in the Realm of Conscience, Wu Youji (Savio Tsang) is executed after he took the blame for Princess Taiping (Alice Chan) when it was revealed that she had been torturing a maid for twenty years. The secret came to light because of investigation by the future Emperor Xuanzong (Steven Ma). Thus, after his death, Wu Youji reincarnates to become...

Yang Guozhong (楊國忠) in The Legend of Lady Yang! 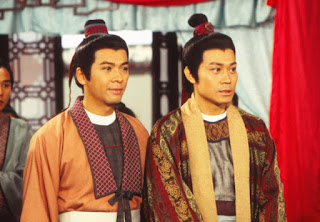 Yang Guozhong is the cousin of Emperor Xuanzong's favourite concubine, Yang Guifei. He is often blamed for the decline of the Tang Dynasty during the later part of Xuanzong's reign. Relying on his connection with Yang Guifei, Yang secured a position on the court and eventually became chancellor. He was corrupt and extremely incompetent in managing the affairs of the country. As a result, the country experienced a sharp decline from its height. Moreover, Yang's rivalry with military general An Lushan prompted An to launch a rebellion. His ill-advised military strategy further enabled An to capture the capital. Yang was killed by Xuanzong's soldiers when he was fleeing from the city.

Email ThisBlogThis!Share to TwitterShare to FacebookShare to Pinterest
Labels: Deep in the Realm of Conscience, Historical Context, Savio Tsang, The Legend of Lady Yang