Both series have received good ratings and comments. Even though Tiger Cub was put into a “cannon fodder” time slot (10 pm on Sunday), it has topped ratings for two consecutive weeks. And while TVB has not put much into promotion for Witness Insecurity, as Producer La Ka Ho has left TVB, it has been well-received and generated a lot of discussion.

Police shows can be considered as one of TVB’s regular features. After many years of producing these dramas, fans have criticized that there is a “standard formula”. Even Tiger Cub’s female lead, Jessica Hsuan, couldn’t resist blasting TVB police dramas for being one and the same, “Actually I think TVB police dramas should have a tighter script, but it must be acceptable to housewives, so there are many restrictions. That is why they are always the same, it is quite old-fashioned.”

Still, TVB police series has really become “textbook material”. Audience have concluded that the dramas will take one of two routes.

In series like Armed Reaction, Anti-Crime Squad and I Can’t Accept Corruption, the police know from the beginning who to capture, but don’t have any evidence. The plot focuses on finding evidence and tracking down the criminal, who is usually a triad member. There is often car chases, gun battles and undercover cops.

Meanwhile, Detective Investigative Files, Untraceable Evidence, and To Catch the Uncatchable takes the second approach. There are typically many suspects, the police will unravel clues and reveal the criminal. The story is of investigating motives and methods to eliminate suspects. The emphasis is on logic and not action scenes. As well the main lead’s friends and families are usually either the criminal or victim.

As for the romantic storyline, it is always like this: Every time a case is solved, the male and female leads will have a relationship scene, but once the romance develops to a certain extent, the couple is bound have some sort of misunderstanding and quarrel, or another case will come up. Everyone will have to set aside their emotions to solve the case first before resuming their relationship.

The old-fashioned dramas tend to have similar plots. For instance, Jessica has been named “TVB Hostage Queen”, because in ten years of filming, she has been held hostage at least twelve times. Besides in police series, Jessica can’t avoid the fate even in ancient dramas. She is most frequently threatened with a knife. Of course, whether a gun is pointed at her or she is being drowned, the male lead will always arrive at the right time for a “Hero Save Beauty” scene. Thus, Jessica was also bestowed the title of “hostage with highest survival rate”.

Jessica’s role as police officer in Tiger Cubs finally does not need to be held hostage. Jessica laughs and says “Don’t know why everyone likes to kidnap me.” Tiger Cubs producer, Lau Ka Ho, expresses, “Being kidnapped is the best way to indicate the female lead’s value. Because she is the male lead’s most loved person, she has great value for kidnappers.”

Note: The article is wrong on two things. First, Jessica doesn’t avoid being kidnapped in Tiger Cubs. Second, the producer of Tiger Cubs is Lam Chi-wah, not Lau Ka Ho.

Don't forget the ending scene where the team is at a mass gathering (wedding, BBQ) and everyone gets a call for a new case. 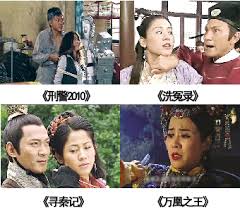