I’m currently juggling between three series and have watched the first few episodes so far. Here are my initial thoughts: 
Guns, bombs, BOOM, BANG!! 3 episodes in and I’m absolutely loving it. Action-packed. A lot of movement, little talk. My type of series. Tiger Cubs is about the operations of the highly-trained Special Duties Unit (SDU). It’s roughly one episode per case. Some very smart criminals, but still no match to SDU’s quality training, teamwork, and sheer power.


If you’re looking for plot, look somewhere else. There’s room to develop a little romance in between cases. Being typical TVB, it features a love triangle between Joe Ma, Oscar Leung and Christine Kuo. But this is obviously not the emphasis of the series. The name Tiger Cubs refers to the two new members of the SDU team, who have to adapt to the rigorous demands of the SDU team. There’s the annoying, hot-headed, arrogant Him Law and the timid, lacking-in-confidence Vincent Wong. Joe Ma, as the SDU leader, will train them to excel in all aspects. Joe is the perfect person for this role because his height and build give off a very “SDU” feel. Being a former G4 member doesn’t hurt.


There’s little need to comment on the acting because running around in armour and guns does not require much acting. The one thing that requires comment is TVB’s decision to air it at the late Sunday night timeslot. I don’t live in HK, so it makes no difference to me, but it’s questionable why TVB wouldn’t air it during prime time. This series to promote TVB’s next generation of male actors: Him, Vincent, Oscar are the most prominent of them. There would certainly be more exposure during a prime time slot. However, Tiger Cubs is still faring pretty well despite all this. The once a week showing builds a lot of anticipation for the audience. I can’t wait for episode 4!


I tend to like police dramas, so I decided to watch this one as well. As you can probably tell, I’m the action-typed person. I despise the slow lovey-dovey plots. So  4 episodes in and my thoughts are: not the best, but alright. This series is a mix of action and romance, as the Chinese title 護花危情 implies.

The first 4 episodes has some good action. The Witness Protection Unit (WPU), led by Bosco Wong, must protect Linda Chung and her uncle from triad members. The mission involves gun fights, car chases and arson. Then there’s the scenes about the withdrawn Linda, who suffers from depression. Bosco and Linda will slowly (and I really do mean slowly) develop their romance. There is no eye contact or conversation between them until episode 4. As of now, I find the series tolerable because it doesn’t bore you with long lovey-dovey scenes. It has just the right balance of romance and action.

The theme song is sung by Linda Chung. While I’m not a fan of TVB artists singing theme songs and definitely not a fan of Linda Chung’s singing, I find the theme song to be quite fitting for the series. Linda’s character suffers from depression and she brings exactly that emotion to the song. 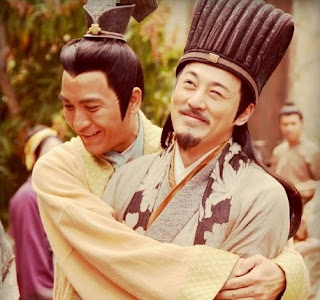 Aside from action series, I’m quite a history buff. I love historical dramas depicting different time periods in China’s imperial past. (Mind you, I don’t like watching dramas set in the pre-modern era after the fall of the monarchy.) Three Kingdoms RPG has been one of my most eagerly anticipated dramas. I’ve always wanted TVB to make a second A Step into the Past, which remains on my all-time favourite dramas list.


First off, Raymond Lam looks awkward with the fake beard. Maybe I’m just not used to seeing him with that. He hasn’t made an appearance in the series yet (it’s only episode 1). I’m sure he will appear tomorrow. The first episode is about Kenneth Ma’s pitiful life in modern-HK. Through a mysterious force field, he finds himself travelling back in time to the onset of the Three Kingdoms period. This is looking good so far and I looking forward to tomorrow’s episode. What happens when Kenneth meets Raymond?