Episode 21 of Three Kingdoms RPG shows Zhuge Liang inventing a transportation tool called 木牛流馬 (literally translated: wooden ox flowing horse) in preparation for the Battle of the Red Cliffs against Cao Cao. It’s true that Zhuge Liang invented the wooden ox, but it was not until later. The wooden ox was used during Zhuge Liang’s Northern Expeditions, which occurred at least 20 years from the current setting in 3K.

It is unclear how the mechanism actually worked. It likely resembled a wheelbarrow with handles that moved the legs up and down, making it seem like a “walking” ox. It was capable of transporting 400 pounds over rocky mountain roads. The wooden ox helped transport food and supplies for the Shu-Han army during Zhuge Liang’s Northern Expeditions. It is believed that there was a hidden mechanism in the ox’s tongue to prevent the enemy from copying the design. 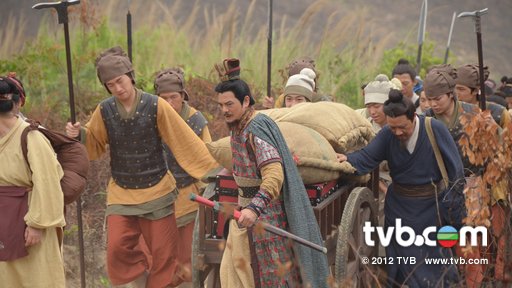 
In 3K, Sima Shun (Kenneth Ma) helped Zhuge Liang resolve the problem of feeding the army at the Battle of Bowang by changing the mantou into a modern-day hamburger. This is yet another timing mistake by TVB. TVB really needs to check out their facts. Seriously, even Wikipedia will do.

The mantou is said to have been the creation of Zhuge Liang during his Southern Campaign, about 25 years after the Battle of Bowang. After achieving victory against the rebels in the south, Zhuge Liang’s army had to cross a river to return to the capital. The local tradition was to offer a sacrifice of fifty human heads to the river gods in exchange for a safe crossing. Zhuge Liang did not want to kill anyone, so he made buns molded into the shape of a human head to throw into the river. He named the buns “barbarian head” (mantou) after what they were supposed to represent.


The Chinese name for the repeating crossbow is called a “Zhuge crossbow”. The weapon was not invented by Zhuge Liang, but he greatly modifying the design to allow it to shoot many arrows simultaneously. He employed it in mass formations, raining down arrows on the enemy.


The Kongming Lantern is essentially an earlier version of the hot-air balloon. In one battle, Zhuge Liang was besieged by Sima Yi’s forces. Zhuge Liang attached messages to lanterns and propelled them into the air by lighting a fire under it. Neighboring allies received the messages and quickly came to his rescue. It is disputed whether Zhuge Liang is the actual inventor because of evidence showing the existence of mini hot-air balloons prior to his time. Nonetheless, the credit was given to him. Alternatively, the invention may have been named after him because the lantern’s shape resembles his hat.

Note: Kongming is the style name of Zhuge Liang.