With the formation of the Liu-Suen alliance, Zhou Yu was said to be extremely jealous of Zhuge Liang and wanted to get rid of him. One was his schemes led to the famous story of Zhuge Liang borrowing arrows, known as 草船借箭. 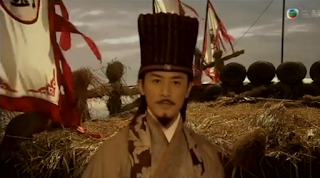 In preparation for the pending battle against Cao Cao, Zhou Yu requested Zhuge Liang to produce 100,000 arrows within ten days, knowing that this would be an impossible task. To his surprise, Zhuge Liang said he would complete the task in three days. After two days, Zhou Yu saw that not one arrow had been produced and was delighted that he could get rid of Zhuge Liang at last.

Unknown to him, Zhuge Liang had asked Lo Shuk (advisor of Eastern Wu) to prepare twenty boats, each manned by thirty soldier and lined with a thousand bundles of straw wrapped in cloth. That night, Zhuge Liang set sail towards Cao Cao’s camp. He ordered his men to shout out battle cries. Because it was a foggy night, Cao Cao’s men could not clearly see the approaching vessels and thought it was an ambush. They blindly shot arrows towards the boats. After a while, Zhuge Liang turned the boats around so that the arrows would hit the other side. Once the fog cleared, Cao Cao’s army saw that the arrows had all hit the straw bundles. By then, Zhuge Liang had already retreated.

Returning to his camp, Zhuge Liang had five to six thousand arrows on each boat, far exceeding the 100,000 arrows that Zhou Yu had demanded.

Ah, another famous story. Too bad it’s purely fictional. Well, it was inspired by the Battle of Ruxukou. In the battle, Sun Quan’s boats were struck by so many arrows on one side that the boats were tipping. To keep the boats afloat, Sun Quan ordered them to be turned around to absorb arrows on the other side and balance the weight.

Posted by miriamfanz at Wednesday, August 08, 2012