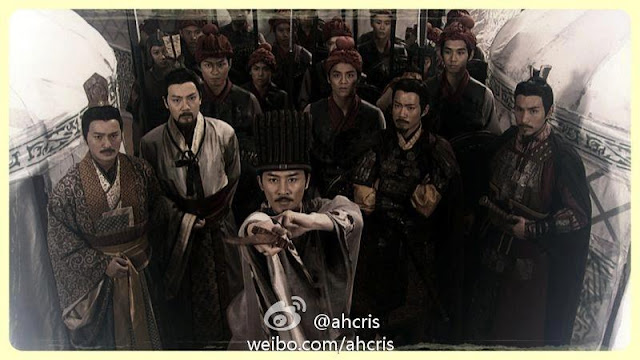 
The Battle of the Red Cliffs was a grand naval showdown between Cao Cao and the Liu Bei-Sun Quan alliance. It is one of the deadliest battles in world history with at least 100,000 deaths. Despite being vastly outnumbered (4:1 by conservative estimates, and 16:1 by Cao Cao’s claims), it ended with a decisive victory for Liu Bei and Sun Quan. This battle more or less settled the boundaries of the three states.

Background:
Upon dominating the territories north of Yangtze River, Cao Cao set his sights on uniting all of China. He chased Liu Bei from Jing Province south to Xiahou in the Battle of Changban. A desperate Liu Bei convinced the eastern warlord Sun Quan to form an alliance against Cao Cao.

The Battle:
In the prelude to the battle, Liu Bei’s forces flee from the Battle of Changban by way of the Han River. They sail towards Xiahou, where the Han and Yantze Rivers meet. Meanwhile, Cao Cao’s army marches south from the battle site to the captured city of Jiangling.

1.   Cao Cao’s army continues along the Yantze River from Jiangling. With the successful negotiation of an alliance, the combined Liu-Suan forces, commanded by Zhou Yu, begins their journey from Xiahou. The two sides meet at Red Cliffs. The tired Cao Cao army is unable to counter the allied forces.

2.   Cao Cao orders a retreat to Wulin on the northern shores of the river. Zhou Yu remains on the south bank of the Red Cliffs, at Chibi City. The two sides are now facing each other with the Yantze River in between.

3.   Zhou Yu’s subordinate, Wong Gai, fakes defection in order to get close to Cao Cao’s camp and succeeds in burning down Cao Cao’s ships. The ships had been chained together for stability, which made it easy for the fire to spread to the entire fleet. Cao Cao’s army suffers huge losses.

4.   Cao Cao retreats through Huarong Pass to arrive at Jiangling. The difficult trek across the marshlands kills more soldiers and leaves the remaining army in tatters.

5.   Cao Cao returns to his northern base, leaving his cousin Cao Ren to defend Jiangling, which eventually falls to Sun Quan’s forces. The alliance weakens as Liu Bei and Sun Quan jostle over the southern territories. The stage is now set for the official beginning of the Three Kingdoms period.