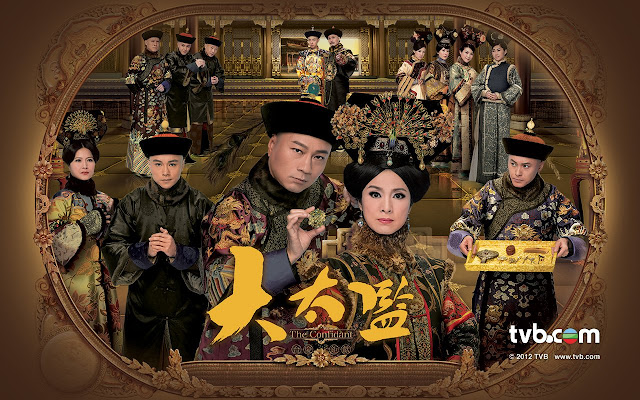 WARNING! Before proceeding, please check your history books at the door. Thank you. Love, TVB.
(There should really be some kind of disclaimer like that before airing any TVB “historical” dramas.)

Plot: Throw away your history books and join TVB on this wonderful behind-the-scenes adventure on how Empress Dowager Cixi and Li Lianying come to rule over China. As a bonus, we add in three(!) amazing love stories. Rest assured there will be no steamy sex scenes that will corrupt the minds of our innocent young children.

Review:
First, the scenery was beautiful. Everything looks so authentic. The cast went to Hengdian to film in the replica Forbidden City, which is scores better than the TVB computer-graphic generated palace (see The Life and Times of a Sentinel). The only question: did they really hold meetings in such a small room? The court officials look so cramped in that tiny room. Some of them even had to stand outside.

In terms of plot, ignoring all historical facts, how is this drama as a fictional piece of work? The Confidant is different from other palace dramas because it focuses on the life of being a eunuch, rather than political struggles or concubines fighting for the emperor’s affections. The beginning offers a glimpse of how life was for a lowly, powerless eunuch. Some have higher aspirations, such as Edwin Siu, while others are content with getting through the day peacefully, like Wayne Lai. The series then turns its focus on the love stories of the eunuchs and that’s when it begins to get draggy. Especially Raymond Wong and Aimee’s love story, where there were endless scenes of them being love-sick. Remember in No Regrets when Fala Chen’s death was dragged on forever? Same thing here with Aimee. Wayne and Nancy’s story was also tedious because he can’t make up his mind on being with her. I find Raymond Cho’s love story was acceptable in terms of time spent on it and its importance in moving the story along. As for the ending, the final episodes were a failed attempt at drama. No one would realistically believe Wayne turned against Cixi. That Maggie Siu and Natalie Tong would believe him shows that either they are very stupid or very desperate. Basically, in the end, Wayne returns to the palace and disposes of the bad guys in an effortless manner.

Wayne Lai certainly deserves TV King for his performance. This time, his characterization was refreshing and different from his classic roles. In the beginning, he is a cowardly, small-time eunuch and he shows this with his facial expressions and voice, where he is more passive and unsure of himself.  As he rises to the top, you can see him maturing. He is more confident and composed. Although he has a sense of righteousness, he finally realizes sometimes sacrifices must be made to do what’s right.

Michelle Yim lacks a certain presence because of her small frame. You don’t sense authority and power streaming from her because she is not towering over people, even when those people are kneeling. However, her emotional scenes are excellent, showing how the heavy burden of carrying the dynasty has taken a toll on her. For example, the scene where she was stunned after the failed coup by Tsui Wing was well done. She also has a compassionate side, which is seen when she is engaging in friendly conversation with her servants.

Maggie Siu goes from nice to evil to nice to evil again. Each time she turned evil, I don’t really understand what triggered her. All of a sudden, she decides she has been unfairly denied of her prestige and power. But she is not an ambitious person to begin with, so I’m not sure what she wants to do with the power. Nonetheless, Maggie makes a very convincing delusional woman. The Emperor truly desires to be a good ruler, but he is frustrated by Cixi and the ministers. Oscar Leung is supposed to a teenager in this role and he is able to reflect that, such as putting on his pouty face when he’s being scolded by Cixi. He also looks great in his dragon robes. KK Cheung’s Prince Gong didn’t have a prominent role because of the lack of emphasis on the political affairs of the day. Which is a pity, because he could have been used to create more drama. What did he ever do with the secret imperial edict that could order Cixi to be executed? Nothing.

Nancy Wu is a great supporting actress, but she doesn’t capture much attention in this drama. Her role serves as the turning point for many character changes, such as Wayne and Power Chan. I felt her death could have been made more dramatic instead of just being killed off by a rogue Edwin Siu. Remember when Wayne said if he had to choose between a brother’s life or Nancy’s life, he would rather let Nancy die? Why not let us see what he will do if he is actually faced with that choice in the end? Aimee Chan was a pain to watch. She was okay in those cutesy scenes fooling around with Raymond W., but in the serious scenes, her face was set in stone. Her eyes are wide and unblinking, and her eyebrows don’t move at all. Even ignoring her accent, the way she says her lines doesn’t convey any emotions. Natalie Tong doesn’t have much of a role until the final episodes. I thought there might have been a mini concubine struggle between her and Cilla Kung, but Cilla disappeared into thin air. Natalie is less annoying here than bulging-eye concubine in King Maker. Selena Li, as guest star in the first five episodes, surprised me. She was especially good at showing her emotions through her eyes, whether it was the sadness of being cast aside or the anger when trying to avenge her child’s death.

I’ve never been a fan of Raymond Wong. There is something about the way he speaks that irks me. Nor do I like his character being all love-sick with the princess. The way he turns evil at the end was weird. Yes, the princess died and I would understand his impulsive rage when he wanted to set the palace on fire. But afterwards, he got obsessed with getting revenge, which is uncharacteristic of him. I was annoyed that he seemed to have forgotten that he, himself, was also responsible for the death of An Dehai. Edwin Siu was entertaining as the silly little eunuch, but when he turned evil, he was trying too hard to look villainous. His glares are not terrifying at all. When he talks, he would roll his eyes big and lift his eyebrows. And when he screams in pain, he cries like a baby. Raymond Cho, on the other hand, perfected the villainous glare. However, he has that look on even with his wife. He seems detached for her even though he is supposedly madly in love with her. Elliot Ngok’s acting was seriously OTT. I recall one scene where he was yelling at Power Chan and his arms were flailing all over the place. Ai-ya, and how can I forget about Power Chan, who has attracted the most attention. At first, he is a bully in the palace, but he slowly grasps the concept of friendship, and in the end, he is probably the most loyal out of that group. Power Chan portrays his character in a light-hearted way that provides comedic relief. Last comment on the eunuchs: I was disappointed that Lo Chun Shun is more or less like a kelefe here because he is the best eunuch ever.

Overall, this was a great series with (mostly) great actors. The major problem is the random character changes. It’s as if time has mysteriously passed by and we see abrupt changes to people’s attitudes and mentalities.

Conclusion: One of the best this year.

Posted by miriamfanz at Wednesday, December 19, 2012