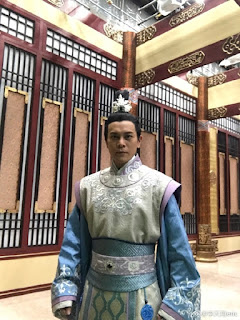 Li Chengqi (李成器) was the eldest son of Emperor Ruizong. At the age of six, he was named crown prince when his father became emperor, but he was demoted from that position when his grandmother, Wu Zetian, became emperor.
Later, his brother, the future Emperor Xuanzong, staged a successful coup and restored their father, Ruizong, to the throne. As the eldest son, Li Chengqi was expected to be renamed as crown prince. However, he voluntarily yielded the position to Xuanzong. Initially, Ruizong was hesitant about this decision because under Confucian principles, the eldest son was the proper heir to the throne. However, Li pleaded with Ruizong, saying "During times of peace, the eldest son should come first, but during times of difficulties, those with merit should be chosen." Ruizong finally relented and named Xuanzong as crown prince. Li accepted a position as adviser to Xuanzong.
Li had a close relationship with Xuanzong, despite constant rumours that he could threaten Xuanzong's claim to the throne. For his part, Li remained humble and stayed out of political matters. Instead, he enjoyed studying music and the arts. He was known for his proficiency with music from different cultures and was particularly skilled at playing the flute and drums. As emperor, Xuanzong treated Li and their other brothers very well. He built mansions for them near the palace and often invited them to enjoy food, drinks and music together. As the years went on, their other brothers passed away one by one, and Li was Xuanzong's only surviving brother. Thus, Xuanzong valued him even more. He often sent gifts and food to Li and personally visited him on his birthdays.
Li died at the age of 63. Xuanzong greatly mourned him and posthumously named him as Emperor Rang (讓皇帝), meaning the "emperor who yielded", in recognition of his status as the proper heir.

Watch this clip from Deep in the Realm of Conscience which shows Li Chengqi's affinity for the arts and the yielding of the crown prince position to his brother.

Email ThisBlogThis!Share to TwitterShare to FacebookShare to Pinterest
Labels: Deep in the Realm of Conscience, Eric Li, Historical Context