In Ghost Dragon of Cold Mountain, the Emperor (Ram Chiang) and his minister frequently discuss about how to reacquire the Sixteen Prefectures.

The Sixteen Prefectures (燕雲十六州) is a historical region in northern China. The territory covers modern-day Beijing, Tianjin and parts of the provinces of Shanxi and Hebei. It includes stretches of the Great Wall and was a strategically important region as it guarded central China from northern invasions.

The Sixteen Prefectures were first created as administrative divisions during the Tang Dynasty. During the Five Dynasties and Ten Kingdoms period, they were ceded to the Liao Dynasty (遼朝), formed by the Khitans in the north.

Shi Jingtang (石敬瑭) was a military general during the Later Tang Dynasty (後唐, one of the Five Dynasties). Sensing that the emperor was becoming suspicious of him, Shi decided to revolt. However, he was besieged by the Later Tang army. Shi desperately enlisted the help of the Liao and agreed to give them the Sixteen Prefectures in exchange. The joint Shi and Liao forces quickly defeated the Later Tang army, which led to the collapse of the dynasty. The Liao Emperor declared Shi to be the emperor of the newly founded Later Jin Dynasty (後晉). Shi ceded the Sixteen Prefectures as promised. In addition, he openly acknowledged the Liao Emperor, who was ten years younger than him, to be his godfather and sent annual tributes.

During the Song Dynasty, the Song court repeatedly tried to recapture the Sixteen Prefectures, but to no avail. Eventually, the Song allied with the Jurchens to defeat the Khitans and regained possession of seven prefectures. However, they lost control again when their alliance broke down and the Jurchens attacked them. The failure of the Song to control the region left them vulnerable to northern attacks and contributed to their weak state.

The Sixteen Prefectures was reunited with the China proper under the Mongol Empire during the Yuan Dynasty. It would finally return to the control of Han Chinese during the Ming Dynasty, after over 400 years of rule by ethnic minorities. 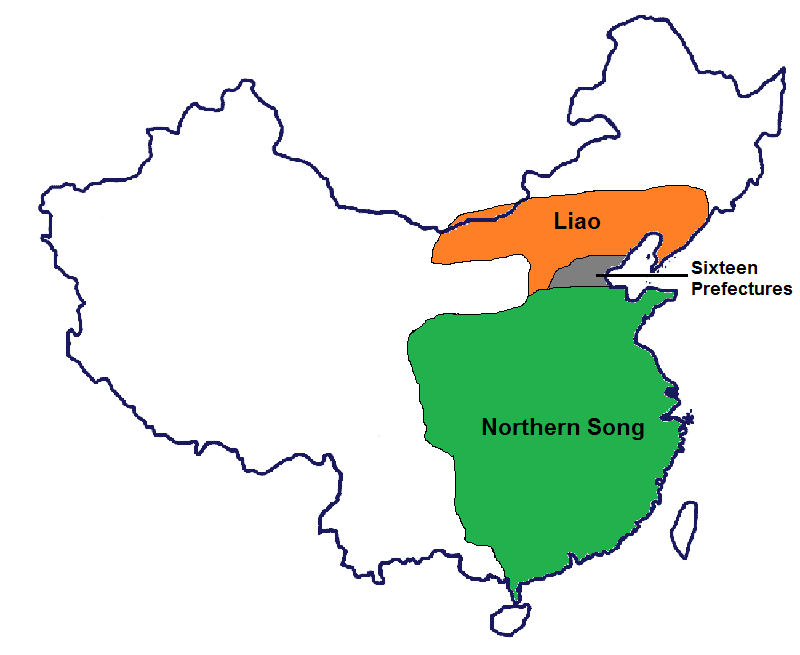