The Cheung Chau Bun Festival is an annual event held in Cheung Chau each May. It has received designation as one of four important cultural events of .

The centuries-old tradition originated as a Taoist ceremony in which the people prayed to the gods, in hopes of preserving peace and fortune in the area. According to legend, Cheung Chau was once hit hard by a plague. Some residents paraded the statue of Pak Tai (北帝), the northern god, around the island. Sure enough, the plague disappeared soon after. As a tribute to Pak Tai, a celebration is held in his honour each year. Despite the religious origins, the Bun Festival has now evolved into a grand celebration of Chinese culture that attracts tourists and non-Taoists alike. The festival lasts for 7 days with carnival games, parades and performances.

The official start of the Bun Festival is marked with a ceremony to “invite” the deities to join in the celebrations. A procession led by a Buddhist priest visits each temple in Cheung Chau to bring the deities to the Pak Tai Temple, where the main celebrations will occur. For the next three days, the entire island goes vegetarian. Even the local McDonalds observes this tradition by offering mushrooms in place of meat burgers. The two highlights of the festival are the Floating Colours Parade and the Bun Snatching Competition.

The Floating Colours Parade involves children dressed as historical figures and modern politicians. They ride atop a pole, which gives the appearance that they are floating in the air.  The parade also includes a variety of other floats, musicians and lion dancers. Red sedan chairs will carry the deities in the parade to scare off evil spirits. 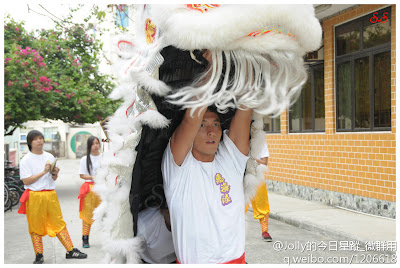 The Bun Snatching Competition takes place at midnight on the 8th day of the fourth lunar month (typically the last day of the festival). Traditionally, people would scramble up the bun towers, made from bamboo, to grab buns stamped with the words “平安” (peace). The higher the bun, the greater the blessings it brings. The competition was cancelled starting in 1979, after one of the towers collapsed, injuring many people.

In 2005, the event was brought back with safety modifications. Only a handful of participants are allowed to climb the tower, now made of steel and covered with plastic buns. There are 9000 buns on the tower and participants try to collect as many as they could within three minutes.

The real buns are handed out to people after the race. An estimated 25,000 buns are handed out each year. In the afternoon, another ceremony is performed to accompany the gods back to their temples. After this, the Bun Festival is officially concluded.