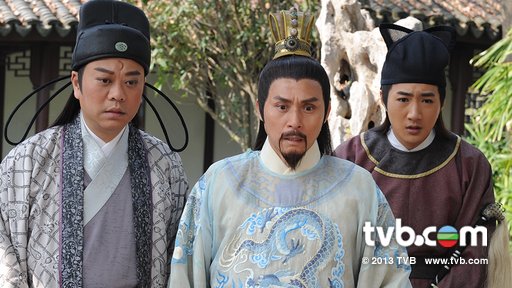 One day, Justice Bao comes across an old lady named Li who claimed to be the birth mother of the currently reigning Emperor Renzong. She explains that many years ago, she had been a palace maid and was impregnated with (the previous) Emperor Zhenzong’s child. However, the jealous Concubine Liu (now the Empress Dowager) bribed the eunuch Kwok and the midwife to substitute the baby for a wildcat. A maid, Kou Zhu, was ordered to drown the baby in the river, but she secretly bought the baby to the 8th imperial uncle’s mansion. Meanwhile, Emperor Zhenzong, believing that Li had delivered a bad omen, banished her to the cold palace. Concubine Liu ordered Kwok to set fire to the cold palace, but luckily, Li was able to escape. Later, Emperor Zhenzong, with no heirs of his own, adopted the 8th imperial uncle’s “son”, who, while unknown to him, was actually his real son. That prince would inherit the throne as Emperor Renzong.

After hearing this story, Justice Bao set up a hoax to trick Kwok into giving a confession. Justice Bao disguised himself as the god of death* and had the sister of Kou Zhu pretend to be the spirit of the maid. That night, they appeared before a drunken Kwok and threatened him with death if he did not atone for his hideous crime. An extremely superstitious person, Kwok immediately confessed to the conspiracy.
*A common folklore was that Justice Bao went to the underworld at night to pass judgment on the dead.

With evidence in hand, Justice Bao took Li to see Emperor Renzong. The Emperor was initially in disbelief that Empress Dowager Liu could be so cunning and evil, but the 8th imperial uncle stepped forward to confirm the story. Finally, Emperor Renzong recognized his birth mother with the proper title of Empress Dowager. Kwok was beheaded with the tiger-headed guillotine and Liu was given a white ribbon to commit suicide.


Emperor Renzong was indeed the son of Li, a maid of Empress Dowager Liu. Yet, he regarded Liu as his mother for many years. How did this come to be?

It turns out everything was actually a conspiracy by his own father, Emperor Zhenzong. Liu was Zhenzong’s favourite concubine and he wanted to make her empress. But she hailed form a poor background and was, therefore, deemed unsuitable to be empress. Meanwhile, there was another problem. Zhenzong had no heirs as his five sons all died young. Liu introduced her maid Li to the Emperor and sure enough, Li soon produced a royal heir. But Zhenzong took her son and announced to the world that Liu was the one who bore the prince. As such, she merited the title of Empress. On the other hand, Li was named as a consort, and she would later give birth to a princess (though the princess did not survive). When Consort Li died, Empress Liu arranged to have her buried with first-class honours. The Empress also sought out her brother and gave him a government position.

Upon Zhenzong’s death, Liu became the Empress Dowager and regent to Renzong. She proved to be a very able regent, taking care of national matters and defending against ambitious ministers. She is described as “Having the wit of Lu and Wu*, but not their evilness.” She and Renzong shared a close relationship. After 11 years as regent, Empress Dowager Liu died from illness. Finally some ministers told Renzong the truth about his mother. They even suggested that Li had been poisoned by the Empress Dowager. Renzong was in shock. He ordered for Li’s coffin to be exhumed. When the coffin was open, he discovered that Li was dressed in robes fit for an empress and her body was well-preserved with mercury. Renzong dispelled all rumours that Empress Dowager Liu plotted against his birth mother. He accorded high titles to both women.
*Lu Zhi and Wu Zetian are notorious empress dowagers for their ruthless ways.

Another point to note is that Justice Bao never could have been involved in this case, as he did not start his career until after Empress Dowager Liu’s death.

In Always and Ever, the son of Emperor Renzong (KK Cheung) is switched for a wildcat, but in the traditional story, it is Renzong himself that gets switched.

Chen Shimei (陳世美) was a scholar living with his wife Qin Xianglian (秦香蓮) and two children. When it was time for the imperial examination, he had to leave his family behind and travel to the capital city to take the test. His years of studying paid off as Chen placed first in the examinations. As per custom, he was invited for a tour of the palace. It had been rumoured that the Empress Dowager wanted to find a husband for the princess, so when the Empress Dowager asked Chen about his family, he lied and said “My parents have died and I am unmarried.” The Empress Dowager was delighted and promptly arranged for Chen to marry the princess.

Meanwhile, Qin waited at home for three years without any news of her husband. Finally, she decided to go search for him. Arriving in the capital with her children, she quickly learned that Chen had become the new prince consort. She went to his mansion and requested to meet with him, but was rebuffed three times. Qin eventually managed to sneak into the house. When she saw Chen, she begged him to at least help his own children. Chen refused to even acknowledge that he knew them and kicked them out.

Chen became worried that his lies would be exposed, so he sent his servant to kill Qin and the children. The servant found them in an abandoned temple, but when he learned of the truth, he could not bear to kill them. Instead, he told Qin about Chen's orders to kill them and then committed suicide.

Angered by Chen’s heartlessness, Qin decided to expose his misdeeds. She went to Justice Bao, who was the only official who would agree to hear the case. Justice Bao asked Chen to appear in court to answer to the charges. Chen, confident that he would walk free because of his royal status, turned around and accused Qin of lying. But Qin was able to produce concrete evidence of Chen's crimes. Justice Bao sentenced him to death according to the law. When the Empress Dowager and princess heard of this, they rushed to the courtroom and tried everything they could to stop the execution. However, Justice Bao was unwavering and ordered the execution of the Prince Consort using the dragon-headed guillotine.


There was a real man named Chen Shimei recorded in the history books, but he lived during the Qing Dynasty (several centuries after Justice Bao's time). The real Chen Shimei was a high-ranking government official. His two friends asked him to help them obtain government positions, but were refused, so they wrote a play about a heartless man with his namesake. To their surprise, the audience loved the story! The play originally ended with Chen Shimei sending assassins after Qin Xianglian, but the audience cried for more. Frantically, the playwrights scrambled to come up with an idea. That's when they saw that the actor playing Justice Bao from the last show was still in costume backstage. They hurriedly pushed him onto the stage to finish the show. The actor exclaimed "Are you crazy? Justice Bao is from the Song Dynasty and Chen Shimei is from the Qing Dynasty. How can they appear together?" The playwrights replied "Who cares? Only Justice Bao would dare to execute the Prince Consort!"

Nowadays, the term "Chen Shimei" is used to refer to a heartless, unfaithful man.

Posted by miriamfanz at Wednesday, August 28, 2013