The Qianlong Emperor (乾隆) abdicated after 60 years on the throne because he did not want to exceed the 61 years of service of his grandfather, the Kangxi (康熙) Emperor. The retired Qianlong took the title Taishang Huang (太上皇), but still held de facto power for the next four years until his death.
-   Christine Ng is the concubine of Qianlong. Her character does not exist in real history.

The Jiaqing (嘉慶) Emperor, played by Yu Yang, assumes the throne after his father’s abdication. War and Beauty was set 15 years into his reign. Beauty at War takes place sometime later in his reign.

Rebecca Chan is Jiaqing’s (second) Empress in War and Beauty. One of her sons is the 4th prince, Mianxin (綿忻), portrayed by Joel Chan in COTRH.
-   Gigi Wong’s role in COTRH is the older version of Rebecca Chan’s role.
-   The 4th prince will be played by the actor Chris Lee in Beauty at War.

Sheren Tang correctly holds the title of Consort Yu (如妃) at the time of both series. She was posthumously named as Imperial Noble Consort Gongshun (恭順皇貴妃). She is the mother of Jiaqing’s fifth son, Mianyu (綿愉), which is child actor Pako Au in Beauty at War.
-   The 5th prince was born in the 19th year of Jiaqing. In Beauty at War, he is said to be seven years old, but in history, Jiaqing already died when the prince was six.
- The 5th prince dies too early in BAW. In reality, he lives until the age of fifty.

In War and Beauty, the other concubines were named as Noble Ladies (貴人). In reality, they all held different titles at the time setting of the drama (in the 15th year of Jiaqing).

Gigi Lai = Consort Hua (華妃). She married Jiaqing when he was a prince. She is the most senior concubine of the Consort rank, even higher than Consort Yu (Sheren Tang). She died in the 9th year of Jiaqing, which is before WAB.

Charmaine Sheh = Imperial Concubine Chun (淳嬪). She was the daughter of the head of the national library committee. [Note that her title shares the same character as Christine Ng’s character in BAW, but they are not the same person.]

Maggie Cheung = First Class Attendant An (安常在). Unlike the ending of WAB, she actually survives the Jiaqing Emperor and is elevated to the rank of Imperial Concubine (安嬪) by his successor.

At the end of WAB, there was an invasion of Forbidden City, which is the Eight Trigrams Uprising by members of the Tianli Sect. The future Daoguang (道光) Emperor (Sunny Chan in COTRH), a prince at that time, led the defensive efforts and personally killed two rebels with his musket. It is said that his heroic actions was one of the reasons why Jiaqing (Yu Yang) ultimately named Daoguang (Sunny) as his successor.

Note: In BAW, a 6th prince was born to the Emperor, but in reality Jiaqing (Yu Yang) only had five sons. 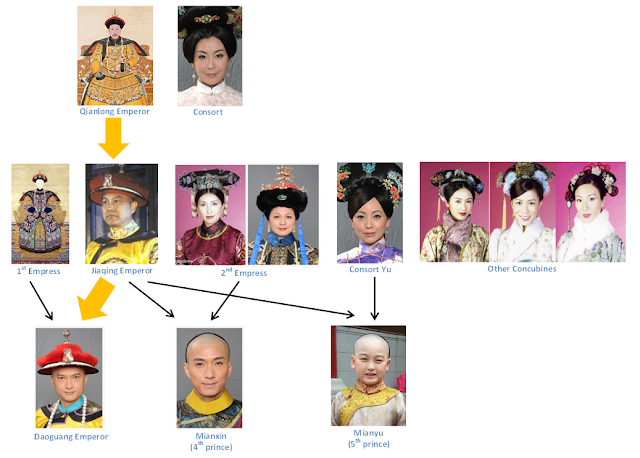 Email ThisBlogThis!Share to TwitterShare to FacebookShare to Pinterest
Labels: Beauty At War, Curse of the Royal Harem, Historical Context, The Confidant, War and Beauty